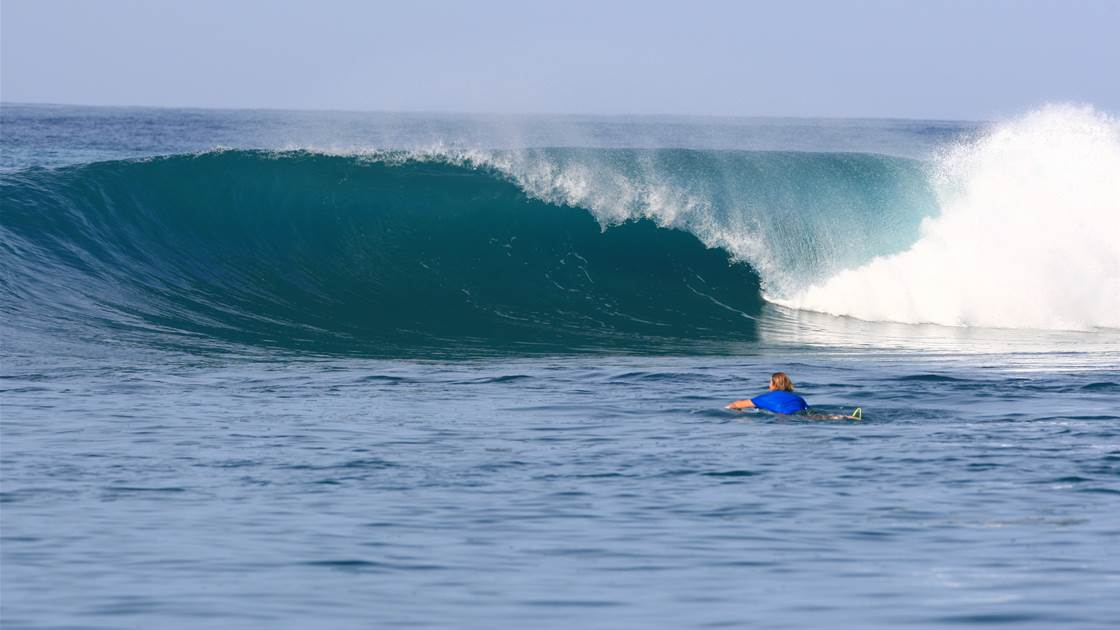 When one person’s pursuit of a surfing fantasy collides with a real-life forgotten tribe.

In almost every surfer there is a yearning or at least a fantasy associated with the idea of having a perfect wave all to yourself. Most often, such imaginings are inspired by crowded sessions that return us to shore cursing the lineup and every punter who paddled out alongside us.

In his short novel, ‘Mine’, author James Russell takes that notion of the isolated wave (or waves) and gives it a very realistic context. The novel is written in first person with Jimmy Brennan as the narrator and main character. When we first meet Brennan he is a 26-year-old tradesman and surfer from the Gold Coast who has obviously grown disenchanted with his surfing life.

“It’s a cruel irony that I am at the peak of my surfing ability and I hate it more than ever,” Jimmy tells us. “Today’s going to be no different. It’s not even 6am and there’s not even a car park to be found on Snapper Rocks road. There are fuckwits everywhere pulling on their wetties and smearing zinc across their faces.”

As the previous passage proves, it is one of the liberties of writing novels that you can use a fictional character to say what you really think with impunity. (Most of the time. Salman Rushdie didn’t have much luck)

Jimmy’s general disillusionment quickly evolves into something more self-destructive when he learns that all is not what it seems with his girlfriend. When his mum passes away Jimmy inherits a sizeable hunk of cash and decides that the best thing to do is skip out on the whole scene and head to Indo. Russell does a good job of making this sequence of events seem entirely plausible. It feels like a real family dealing with the fall-out of their mother’s death in their own respective ways and the first person style creates an almost autobiographical feel.

With Jimmy’s self-destructive quest becoming increasingly more intense the book kicks along at a freight-train pace. Soon the setting shifts to Bali, but the familiar combination of crowded waves and whirlpool bars are never going to help James exorcise his demons.

Russell keeps the writing tight with an engaging two-dimensional approach. We are invited into the mind of a depressed and self-destructive surfer through whom we also get descriptions of the outside world. You get the feeling that Jimmy is not a bad guy, just a little unhinged. As the book progresses there’s a growing undercurrent of unease. You can sense that Jimmy, driven by his own self-destructive tendencies is on an irreversible collision course with some kind of life-changing event.

As he goes south psychologically Jimmy keeps traveling north geographically, until he gravitates towards an isolated island occupied by a tribe that has violently rejected interaction with the outside world. There are rumours that the island plays host to a series of perfect waves. It is here that the novel takes more than a little inspiration from the true story of the naïve, young missionary, John Allen Chau, who travelled to North Sentinel Island in the Andaman chain and attempted to convert a forgotten tribe of people to Christianity. They responded to his ambitious proselytizing with arrows and ultimately killed him.

Does Jimmy suffer the same fate? Let’s just say he goes equipped with a surfboard instead of a bible and certainly finds the kind of perfect, isolated wave we all dream about. Unlike many novelists who write about surfing, Russell knows his subject well and does a good job of writing originally about the very act of riding a wave.

Ultimately, ‘Mine’ is a suspenseful and engaging novel that you will struggle to put down. The premise may have been borne out of a search for surfing nirvana, but the novel looks very honestly and realistically at what we might discover about ourselves when we reach that fantasy destination.

Mine is Available here but do a search for other options.