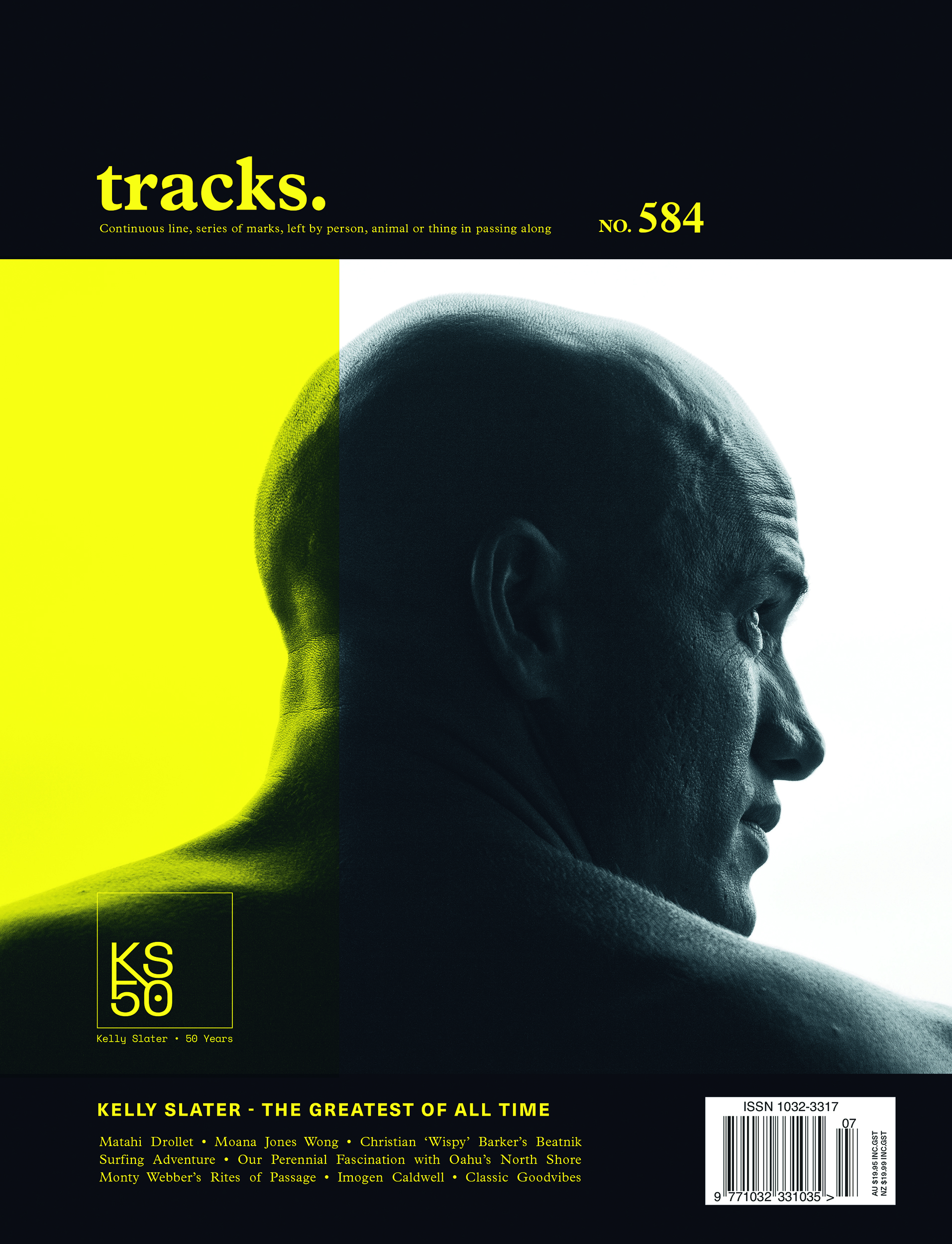 Kelly Slater just turned 50 and racked up a 30-year reign as the king of professional surfing. We figured it was a fitting time to comb through three decades of Kelly in Tracks. Matahi Drollet setting the benchmark for barrel riding at the world’s heaviest wave. Moana Wong’s rise from obscurity to premier female exponent at Pipeline. Christian ‘Wispy” Baker escaped Australia at the height of lockdown for his love and didn’t look back. A pictorial tribute of Oahu’s North Shore from a winter that had it all. A rollicking journey through surfing’s rites of passage amidst a wild, urban tribe. Plenty more to see in issue 584. Enjoy.

If you really want to understand the evolution of Slater as a surfer and a human then this is a revealing history of the greatest of all time.

No prize for guessing who owns the slightly incongruous dome that graces the cover. Kelly Slater just turned 50 and also racked up a 30 – year reign as the king of professional surfing. We figured it was a fitting time to comb through the back issues and extract the most insightful, entertaining and bizarre Kelly references from three decades of Tracks. 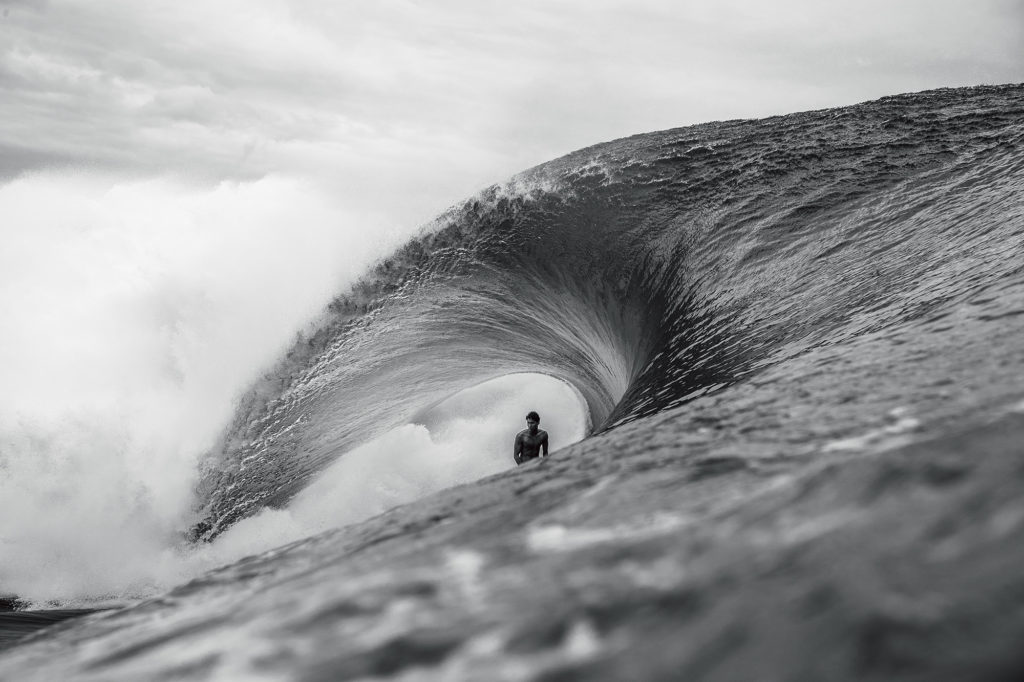 Before he hit double figures, Tahiti’s Matahi Drollet was drawn to the ominous wave on his doorstep. A bright student, who was sent away to boarding school, he could have pursued other paths, but instead he answered the call of Teahupo’o. Following in his brother’s footsteps, Matahi has become the preeminent performer at the thunderous left. Now aged 24, it seems Matahi no longer measures his rides in magnitude or size but in how nonchalant he can appear when entombed by violent curls of ocean. Earlier this year Moana Jones Wong glided into our lounge-rooms and hooked under the lip at Pipeline.

By the time she exited the tube with all the poise of a master, she had won our hearts and the Pipeline Pro. Find out how Moana infiltrated the most macho and challenging line-up in the world and became one of the most celebrated surfers at Pipeline, in the modern era. PYRAMIDS FROM THE SKY

Christian ‘Wispy’ Barker was in love, but his girl was on the other side of the world and a global pandemic had created seemingly impenetrable borders. Somehow, he hustled a flight out of an empty Sydney airport.

Wispy knew he’d made the right call when he looked out the window and stared in wonder at the Great Pyramids below. Eventually his journey would take him through the Canary Islands, Mexico, The Maldives and France, all in the midst of a curse called COVID. Find out how he pulled it off and how much fun he had. Savour our pictorial tribute to the North Shore.

Try as we might we can never turn our backs on the Aleutian swell trains which collide with the volcanic fringes of Oahu’s North Shore, each northern hemisphere winter. This season, the fabled stretch was blessed with back-to- back west swells and the faithful pilgrims enjoyed non-stop waves beneath rainbow-painted skies FROM ZERO TO THE HILL

Monty Webber reflects on his Bondi upbringing amongst a wild, urban tribe and a family of fledgling shapers.​

There’s no doubt a section of modern surfers have fallen in love with the surfboards, fashion and ideals of the 1970s, but what was it really like growing up at an Australian beach back then. 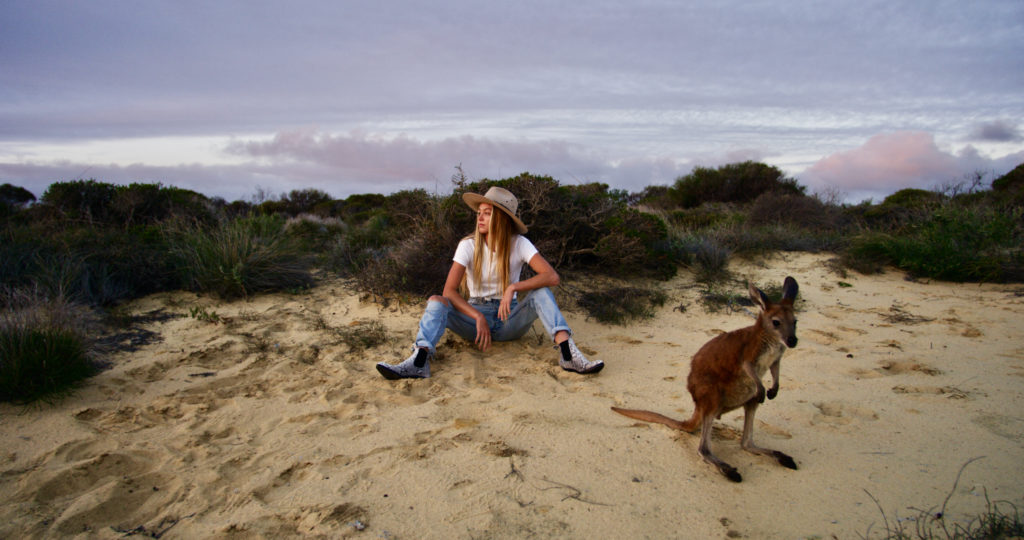 That’s Imogen Caldwell describing her far north upbringing, where if you wanted to surf the only option was taking on the shallow, grinding lefts at The Bluff and Gnaraloo. These days Imogen juggles modelling gigs with motherhood, but if the reefs are six-eight and firing you’ll still find her deep inside a barrel East coasters, Grayson Hinrichs and Holly Murphy had just finished school and were looking for fun.​

Alongside a few, fellow high school graduates they packed up a truck and pointed it west. What followed was a cannonball-run across the continent, dodging border closures, catching fish and riding barrels along the way. Live vicariously through their excellent adventure. A surfer returns to the north-eastern, Australian town he grew up in to settle up his family affairs.

He soon finds himself awash with the memories of his adolescent, surfing years. Meanwhile, cyclone Seth is battering the coast. Past and present gain new perspective as the waves turn on at an infrequently surfed location.