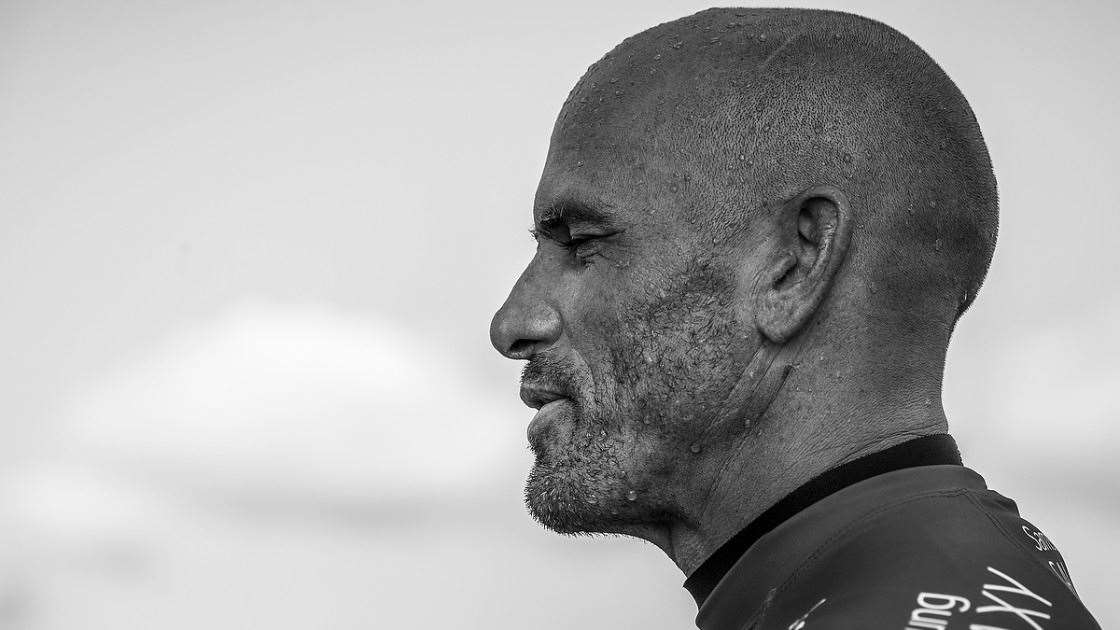 The WSL released the eighth instalment of Kelly Slater’s series Lost Tapes. The episode ‘Golden Opportunity’ features Kelly travelling to Japan for the first time since 1990 in his pursuit for a spot in the 2020 Olympics.

“There’s a wave we surfed called Currens point, What you would say, easily 40 foot faces, giant crazy waves, no one had the balls to surf it, and then Tom Curren went out and paddled out by himself. Then Tom Carrol and I followed along, but I was like 19 at the time, and it was pretty scary. It was big; it was proper big waves.”

Tracks covered the legendary ‘Currens Point’ session in January 1992 Issue, no. 256. Thanks to Tracks archivist Ray Henderson for helping us find the feature.

Here’s an excerpt from the article written and photographed by Kirk Lee who was there to witness a special moment in surfing history.

“The surf was incredibly huge, almost closing out across the entire bay. Outside the harbour, 15 foot-plus waves hurled themselves against the protective jetty. Fishing boats were at a standstill — there was no way to leave the harbour without facing certain disaster.

As we scanned the line-up, the lefts and rights which the crew had surfed the day before were no longer rideable — awash with frothy white water and a tremendous rip current. No one was out. Yet, as we looked further up the point on the right side, we saw a lone figure paddling over a huge set of waves, waves that were rideable, waves that looked like Sunset Beach, only thicker, if that’s possible. It was hard to imagine that this was Japan. Fishermen in the area who had been there for decades said they had never, ever, seen waves this big.

On the last wave of the set, the lone figure quickly spun around and took off on a monster of a wave. The drop seemed to take forever and was followed by a long drawn-out bottom turn. The glare from the sun reflecting off the water prevented most of us from recognising who it was until Tom Carroll screamed out “It’s Cassa!” Who? Carroll quickly informed us of Curren’s nickname, known by only a few. Curren rode the wave quite gracefully and kicked out quickly before the deadly inside close out section. Carroll then looked at Slater with a grin and was quick to utter, “I reckon we should give him a little company in the line-up.”

Later, Carroll readily admitted that if Curren had not already been out there, in all likelihood he would not have paddled out himself. Slater, with little previous reputation as a big wave rider, appeared a tad hesitant, but was quickly consumed with the idea of surfing big waves alone with his two biggest surfing heroes. Within minutes they were paddling their way through the strong rip and reached the outside line-up. Slater recalls, “I felt pretty small and insignificant out there. Huge waves were breaking all around me. I had trouble enough just trying to find the correct line-up and not get caught inside the impact zone.”

Under relatively cloudy skies, Curren arid Carroll took the drop on nine or ten monster-size waves over the course of the next hour. Slater managed to catch only one while feeling his way through a potentially dangerous line-up. It really didn’t matter. Just paddling out there was respect enough in my book.

Kelly was perhaps the only surfer to have brought a board (7’2″) big enough for the challenge. Earlier that morning, Curren had paddled out on a 6’8″ and found the going slightly difficult. He came in and after a bit of searching, borrowed a 7’6″ from local Miyazaki surfer Hiroyuki Kohtsusa. Carroll, on the other hand, was forced to settle for his 6’8″. In spite of the small size of his board, his previous big wave experience helped pull him through some critical situations.

The three man session lasted for 90 minutes before Curren and Carroll were forced to come in, due to their first round contest heats being held later that day.”

Read the full article, and every issue of Tracks ever, front-to-back with a Tracks premium subscription.