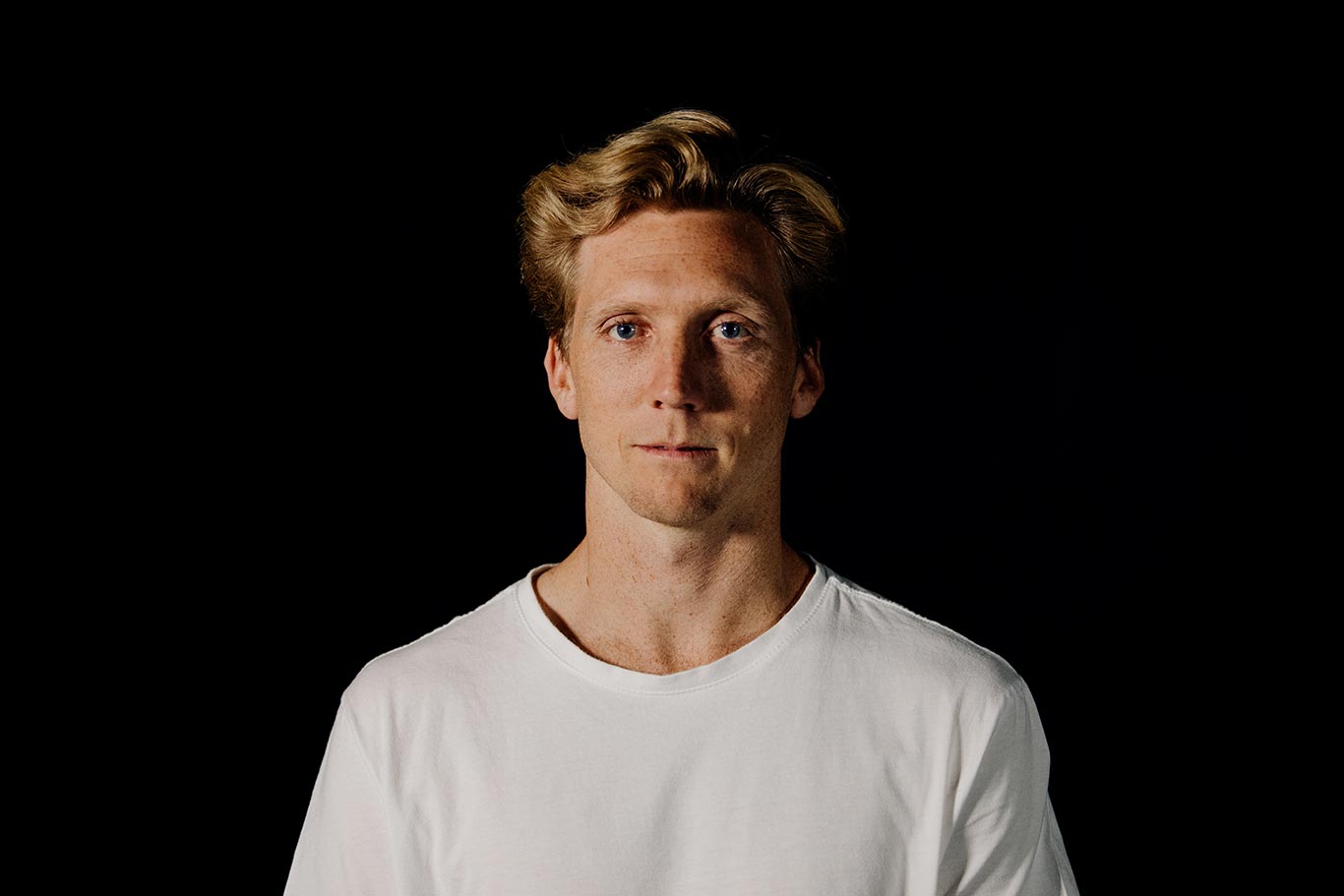 “The story has been told, re-told and recycled by pretty much every major news outlet Down Under and around the world. So it’s only fair we’re gonna do the same.

On March 30, 2016, 22-year-old, soon-to-be-pro Brett Connellan was attacked by a shark at Bombo Beach, 124 clicks south of Sydney, New South Wales. The attack was brutal and should have been fatal if it wasn’t for a leash-turned tourniquet that day.

Almost six years later, Brett’s back in the water, ripping. His left lat muscle making up the missing tissue in his thigh – a procedure doctors said would enable him to walk again (at best).

Brett has been doing the rounds lately, promoting his upcoming documentary, appearing on breakfast shows and in every remotely serious surf mag around the world.

The media loves a good drama. They love a hero who fought through adversity to come out on top despite doctors telling him he might never be able to walk again. It’s that feel-good, happy ending shit that makes us feel warm and fuzzy inside.

The only issue with it; it represents about 17% of what really happened in the last few years.

Brett is a legend. Not by means of triumph, because he lost that fight on March 30, 2016 by half a leg. I was there that day. As a friend. I remember feeling everything on the scale from shock to panic, sending a series of messages to Brett’s phone, with blank uncertainty being the only reply.

Fast forward to today. A lot has been said, written and speculated since then. Yes, it was ugly. No, it probably wasn’t a Great White. Yes, he has his left lat muscle replacing missing parts of his thigh.

While the media likes to work the angle of “young aspiring pro surfer attacked by a shark” to get more eyes on it, I don’t. And Brett doesn’t either because there’s nothing heroic about that.

It translates to failure and ultimate surrender because Brett never made it Pro. He still surfs for pleasure. He works a regular job. But that’s what makes him legendary – not the attack, but what followed after.

“It’s how you respond to things that matters most,” insists Brett. Life’s going to throw shit at you, whether you like it or not, and you are ultimately given two choices. Be defined by what happened, and feel sorry for yourself, or by what you’re going to do about it. I’d choose the latter every time.”

The shit life threw at Brett that day was a car-sized shark, a few months of rehab, lifelong souvenirs scattered across his body, and most of all, squashed dreams of ever going Pro. Now, for most of us, this would be a good enough reason to start enquiring about those weekly disability checks and fire up the antidepressants.

But not for Brett. Softly spoken and intellectually sexy, the demeanour is deceiving yet appealing. The media introduced the man with the best hairline south of Sydney as everybody’s darling who survived a shark attack. A reality that has somehow turned him into a media sensation of late.

However, are they missing the point? There’s nothing heroic about getting lucky. And that’s what Brett was that day. Fucking lucky. He didn’t ask to have his leg mauled by a shark. They didn’t meet up after school to settle an old dispute with bare knuckles in a circle of spectators.

It just happened. Wrong place, wrong time – dancing with a creature that should have turned Brett’s lights off. But… it didn’t. And that, should be the basis of all the notoriety.

He shouldn’t be getting credit for something beyond his control, but instead, for everything that followed after.

Ask him. He doesn’t want to be remembered as the guy who punched death in the throat. That’s the other blonde guy with a flawless hairline (and three world titles). Not Brett.

“I’ve always found it uncomfortable to be described as inspiring, motivational, courageous etc., for having survived a shark attack. It wasn’t up to me. It never was. I just tried to control the narrative after.

In reality, you can’t have those connotations without struggle. Obviously, that struggle for me was a combination of physical and mental pain after being told I wouldn’t walk and later surf again.

That loss of purpose and identity was tough for me to overcome. However, I was lucky to have incredible support from a number of people around me and the surf community (Thanks) for helping me work through all that.

I learned very quickly that some things couldn’t be worked through alone, and the context of mental health became an integral part of my story. For example, I wouldn’t have been able to take that first step on my journey of physical recovery if I hadn’t looked at my mental health first.”

Resilience and vulnerability might not be words Hollywood uses to describe their on-screen heroes, but they illustrate the heroics Brett should be getting recognized for.

Surviving a shark attack was the easy part, but it took courage, motivation and a ton of strength to A: open up about the demons in his head, and B: ask for help to come out the other end.

“No doubt, the attack is the fuel to the fire and the type of story that catches people’s attention. It’s like I’m having a target on my back I’ll never be able to shake. But rather than push it away or sweep it under the rug, I found it was the best conversation starter for being able to talk about the more important things in life. So it’s kind of like the ultimate, positive bait and switch in a way.

Seeing my story’s impact on others brings me purpose … But, at the same time, it’s so wild because I’m naturally a quiet person, and all that attention is kind of weird, but for me having a new purpose is stronger than anything.”

Quite the career change for a guy who was once touted to cash in on event wins but instead finds himself on morning shows and podcasts. But how important has surfing been for Australia’s new favourite C-level celebrity since the attack?

“I’ve undergone a huge shift in considering where surfing sits in my life. Although I can still surf well and have worked hard to get here, the reality is that surfing with your lat muscle in your quads feels different. But that doesn’t mean I still can’t enjoy it.

If anything, I actually enjoy it more now because I’m just grateful to be out there, and taking that attitude has helped me redefine how I approach surfing.

It’s an experience that was important to be re-told the right way in the upcoming movie”.

Yes, the movie with a name so complicated that it needs an asterisk and a footnote explanation.

PYROPHYTIC* [pie-ro-fite] noun. A plant that is resistant to fire or is stimulated by fire to germinate or regrow

Highlighted in red by my paid spelling subscription, it underlines the complexity of the word so perfect to describe Brett’s story. The subject of mental health is complex. Processing a traumatic event such as a shark attack as well. Working through anger, grief and sadness on one side, hope, joy and happiness on the contrary even more.

“A lot of people ask about the timing of the film. Of course, something that happened nearly six years ago should be considered “old news,” and that can be true. But there’s a reason for waiting for this long.

Firstly, I had offers to “sell” my story early on. That never sat right with me because I knew I would be surrendering any control I had over the film. It would just become some shark-centered narrative (in a negative way), and that kind of defeats the purpose.

Secondly, at that time, I didn’t feel my story was “done.” It might sound clichéd, but if we had released the film back then, I don’t think it would be a true reflection of what I’ve learned and what I have to offer the world as a result of everything I’ve been through.

So the narrative shifted from coming back from a shark attack to what I plan to go through to prove what’s possible when you’re told you can’t do something.

And that is the ultimate testament I want to be remembered for.”