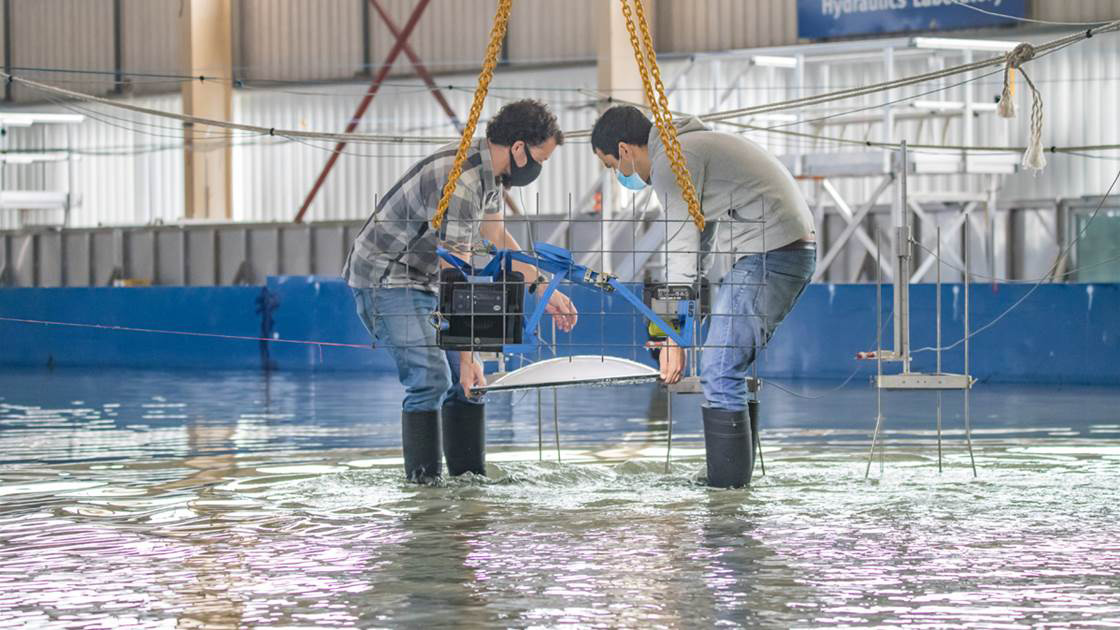 Despite a setback, Troy Bottegal is determined to see his rubber-dome, artificial reef making waves.

Over the last couple of years, Tracks has been following the progress of inventor Troy Bottegal and his Airwave concept. Troy is an electrician by trade but demonstrated his entrepreneurial flair when he and his partner Samantha launched a successful chain of Asian fusion sushi takeaway stores in Western Australia. Buoyed by his business success and frustrated by the endless supply of straight-handers in Perth and his hometown of Bunbury, Troy had a vision. He wanted to build a cost-effective product that could transform a long stretch of closeouts into a field of A-frame dreams.

In a nutshell, the Airwave is a partially inflated, sand-filled rubber dome that acts as an artificial reef. The dome is designed to trip an incoming swell and produce a tapering A-frame peak. It’s made of environmentally neutral impact rubber and is anchored to the sea floor by 140 tonnes of sand. It can be installed in a day by boat and removed, or relocated, within the same time span. While a wave pool would cost a local council tens of millions to build, Troy claims they could install an airwave and dramatically improve wave quality at a local beach for half a million Australian dollars.

When we last touched base, Troy was on the cusp of making his first trial of the full-scale Airwave. He had the backing of Bunbury council in Western Australia and a live internet feed set-up at the beach to showcase his creation. The dream was to install the Airwave, wait for the first swell to hit the somewhat inconsistent Bunbury stretch, and then webcast images of perfectly peeling waves around the world. Of course, it didn’t quite play that way.

Troy readily admits that the first trial of his Airwave was a failure. According to Troy the critical error was made whilst pumping sand into the Airwave. Instead of evenly distributing 140 tonnes of sand throughout the hollow dome, they concentrated the pumping too heavily in one quadrant. This in turn put too much pressure on one section of the rubber skin and it split; a bit like the weak seam of a football where the bladder is applying too much pressure to the leather.

Despite his disappointment, in relation to the initial trial, Troy didn’t give up. He’s very much a subscriber to the theory that no great invention ever came to fruition without a few hiccups. He likes to use the analogy of the Formula One motorcar. “If you don’t break at least one in the testing phase you will probably end up with a car that is too slow or too heavy.”

Troy has made a couple of key alterations to the original design and is adamant that this will rectify any issues with the Airwave. “We’ve changed from a glued hypalon to a stronger compound that can be welded and we’re manufacturing it in Australia,” indicates Troy. “I’ve also changed the shape. We kind of had a bit of a skateboard ramp type thing happening but I’m now going for a more classic dome shape to better distribute internal pressure.” As for the problems associated with pumping the sand that anchors the Airwave to the seafloor, Troy believes his modifications will ensure the sand is better distributed throughout the dome. “We’ve relocated the valves to make sure we don’t get the same over pressurization problem as we had before. We were pumping into quite a confined space on the last one.”

Determined to get more expert input for his concept Troy also reached out to Alex Atkinson who is the chief scientist at the Queensland state government hydraulic laboratory. Atkinson and his team (who are involved in modelling some alternative uses for the Tweed sand bypass system, which famously feeds sand to the Superbank) gave Troy access to their testing tank. When they ran a scale test of the Airwave’s new model (see the photos) it produced some encouraging results. “I got a bit excited, it actually produced the scaled equivalent of 40-50m peeling waves,” explains Troy enthusiastically.

With his confidence boosted by the recent tank trial, Troy is convinced that the modified Airwave is ready for a full-scale trial. Two students from the University of Western Australia have been working on the computer modelling while Troy still has the support of the Bunbury City Council to use their beaches as a location for the next live trial. The small, coastal city to the south of Perth (just north of Margaret River) receives consistent swells and Troy is adamant that it’s an ideal location for testing – notably because it should showcase the capacity of the Airwave to transform an average wave into a much better one.

The Airwave has been a ten-year journey for Troy, but like many inventors, he now finds himself in a situation where his desire to create something meaningful has outstretched his access to capital. Troy claims he is seeking investment to launch a second, scale model and make the Airwave a viable global product. For that, he’s willing to give up to 45 % of the business. “I’ll be honest with you… I’m looking for a business partner… probably a motivated surfer who’s well-off. ”

From an investor’s perspective, Troy claims there has already been plenty of interest in the Airwave from different parties around the world. “I’m getting calls and emails from people saying we want three once you’ve proved the tech… I’m looking mostly at municipalities but then there is, for example, a guy from Santa Monica who has got mates with a tonne of cash and they’re like, ‘we’ll drop three outside our place straight away’ .”

It would be easy to default to the Australian tall poppy syndrome and dismiss Troy Bottegal’s Airwave concept as the hair-brained idea of a backyard fantasist or simply something that belongs in the too-hard basket. However, it would be much better for every surfer if his bold concept came off. Surely we can all think of a whomping closeout with the potential to become a perfect wave? And on a cost-per-unit basis, it’s way cheaper and easier to install an airwave than convincing a council to build a wave pool. Richard Branson and Elon Musk want to go to space. As surfers, we’re just keen to create more opportunities to get barrelled. Surely we can achieve this more earthly ambition without always having to build an expensive wave pool? Troy Bottegal is certainly giving it a fair crack.