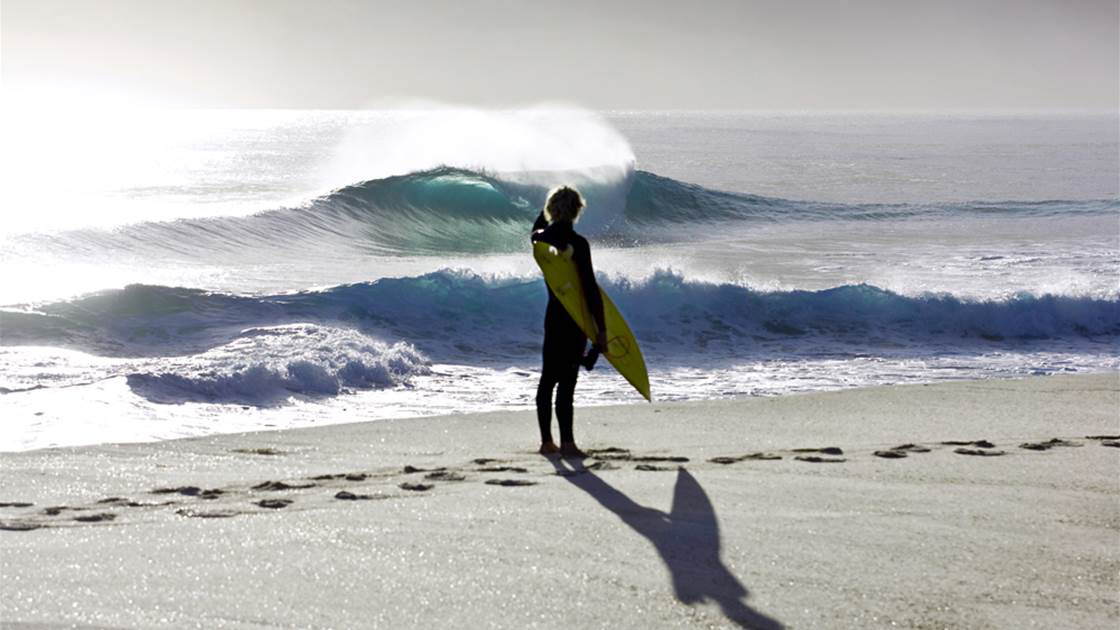 This new book makes surf photography feel like fine art while telling the story of the Australian love affair with waves and the ocean.

We all have our own treasured memories of the waves we’ve ridden, but the image of surfing – the very idea of it – has in many ways been defined by Australian photographers. John Ogden’s striking new book, ‘Waterproof Australian Surf Photography since 1858’, treats the genre of surf photography with all the dignity, respect, and creative kudos it warrants.

The hardcover, coffee-table tome pays homage to the Australian masters of an under-appreciated art form. The surf lensman are a tribe who have scaled cliffs, swum over treacherous reefs, flippered through sharky waters; dodged boards, and dealt with huge pro-surfing egos. They followed a muse so that surfers could in turn be entertained and inspired by the crystallized moments of wonder they captured. Along the way, the photographers have also added an important thread to the complex tapestry that makes up the Australian sense of identity.

Given Waterproof’s expansive celebration of Australian surf photography and the book’s beautifully curated format, it’s the sort of publication that should earn acclaim from beyond the surfing sphere, and help elevate the status of surf photography in wider artistic circles.

While it can be enjoyed on a purely pictorial level this is much more than a book of rapturous photos. It is both a written and visual history of the surfing image in Australia or put another way a chronicle of our enchanted relationship with the ocean. We learn that the first known photograph of a boardrider in Australia featured Tommy Walker performing a headstand at Yamba beach. The photo was taken by the fabulously named Osric Burton Notley, in 1911, three years before Duke Kahanamoku flashed his famous smile for the cameras and trimmed across a few rollers at Freshwater.

According to ‘Waterproof’ one of the first Australian photographers to fall under the spell of the endless breaking waves on our coast was Frank Hurley. Hurley more or less created the blueprint for the surf photographer as the adventurous artist. A teenage runaway who saved up for his first camera gear by working in the Lithgow mines, Hurley was taking popular pictures of waves as early as 1905. By 1911 he was the official photographer on the Australian Antarctic expedition alongside Douglas Mawson. He travelled to both first and second world wars as a photographer and in-between became a filmmaker. His 1937 film ‘Tall Timbers’ was one of the first to feature action footage of boardriders.

Amongst the book’s various images of early Australian beach culture, there is one in particular that stands out. A 1914 shot of Sampson a Worora tide rider from North-West WA. A tall, athletically built indigenous man whose chest and abdomen are striated with the scars of initiation, Sampson is pictured standing proudly aloft a raft of seven mangrove logs. His stance upon the floating craft belongs every bit to the nonchalant longboarder who rides a wave with confidence and skill.

After ‘Waterproof’ weaves through the nascent period of Australian boardriding culture, which blossomed between world wars, it hits the 60s where we meet early masters like Jack Eden. We are told that Eden was once described by Midget Farrelly as “the most important recorder of surf history in Australia”. Eden shot images for his own magazine ‘Surfabout’ and was also the Australian correspondent for ‘Surfer’ magazine. He was prolific in the late 50s and early 60s with Farrelly, Bobby Brown and Kev ‘The Head’ Brennan amongst his favourite subjects. His famous shot of ‘The Head’ in bicycle stance remains a timeless classic and one Ogden lists as a personal favourite. Given the amount of time traversed and the number of photographers (50 with a few more) Ogden can’t indulge anyone with more than a page or two. The benefit of tight curating is that we get to see examples of the photographers’ best work. Meanwhile, each turn of the page brings a distinctly different style leaping forth from the high-quality paper. The book’s chronological progression from black and white to colour, and from film images to digital ensures we get to see all the variations of the colour palette that have been explored in surf photography over time.

Beyond the 80s the names of photographers become more familiar to anyone who reads the by-lines when they pore over on the pages of surf magazines. If you’ve never bothered to think too much about the people behind the lens who have provided you with a steady supply of high-quality surf imagery over the decades ‘Waterproof’ will give you a renewed respect for them.

To ensure it becomes more than just a series of mini-profiles on photographers, Ogden breaks up the bios with more thematic topics relating to surf photography. The impact of digital photography, the role of surf media, and the marginalization of women’s surfers are all addressed in engaging, bite-sized chunks of copy that contextualise all that dreamy imagery.

In his well-crafted introduction, Ogden even goes so far as to ask the hardest question of all – ‘What makes a good surf photograph?’ He postures that once you satisfy the technical requirements it becomes highly subjective, much like trying to define what good surfing is. However, in one succinct sentence, he probably nails it. “A legendary image rises above every debate.” Indeed ‘Waterproof’ is filled with images that satisfy that telling criterion.

The book also features a Foreword by Tom Carroll who has spent a lifetime as a brilliant surfer aspiring to be a good photographer. Tommy rarely goes anywhere without a camera slung over one shoulder these days. In his Foreword, Tommy points out that ‘Waterproof’ is not only a “… homage to the pioneers and leading lights of surf photography. It provides a, lineage … a road map to where we are.”

Using the photo as the primary medium of storytelling ‘Waterproof’ does indeed provide us with a dazzling account of Australia’s historical love affair with waves and the ocean. We are a nation with 34 000 km of coastline – ‘Girt by Sea’ as the National Anthem somewhat awkwardly puts it. In a salt-water framed setting such as this a copy of Waterproof belongs on everyone’s bookshelf.