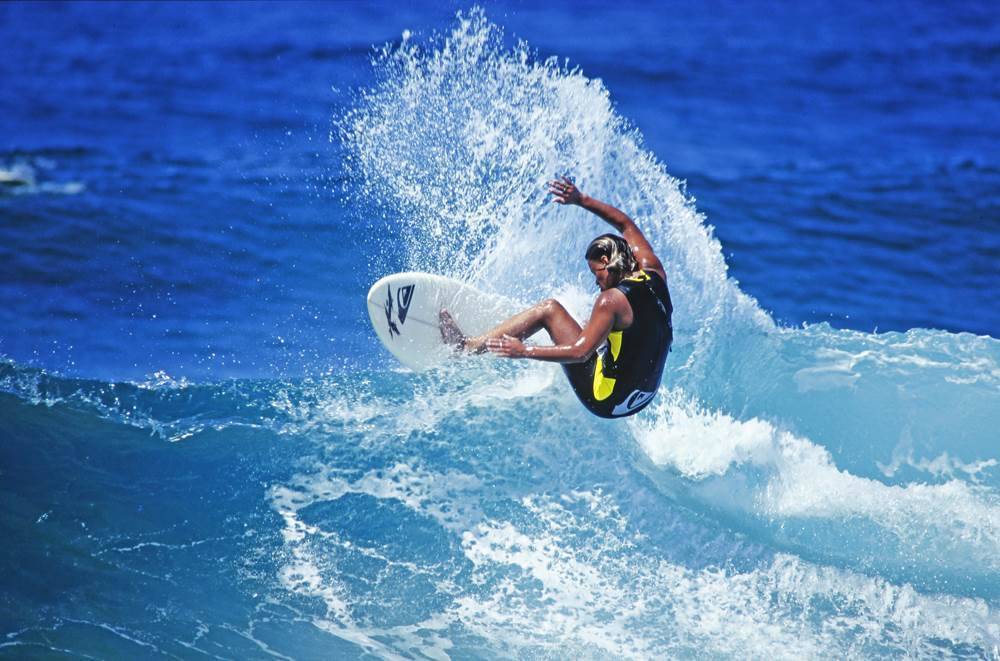 An intimate and compelling take on the original Roxy Girl.

Many of us prefer our favourite surfers to have a hint of mischief.

Perhaps it’s because we fall under their spell during our own phase of teenage rebellion or maybe their imperfections make their otherworldly existence seem more relatable to the ordinary, problem-filled lives we lead.

In Lisa Anderson’s new bio film, ‘Trouble’,  it pretty rapidly becomes apparent that this is not just a pretentious title designed to jag our attention. Young Lisa was up to no good – smoking bongs, drinking too much, scoffing donuts til she spewed, accidentally steeling motorbikes and skipping school to go surfing. Her friends dubbed her ‘Trouble’; meanwhile a judge decided she needed a short stint in juvenile detention. “The judge was definitely not stoked on me,” suggests Lisa, casually employing surf speak to summarise the rulings of a magistrate.

Out of detention, but under pressure from her parents to ditch her surfboard and her pro surfing dreams, Lisa decides to runaway to Huntington Beach, California, and live with the much older guy who made her first board. The trouble certainly doesn’t stop, but it does put her at the epicentre of an exploding surf scene where there are contests every weekend, sponsors, world-class competitors regularly drifting through town and clip-board wielding coaches to tell her to hit the lip harder. And so begins Lisa’s winding journey towards the world tour.

A series of cinematic devices underpin this slickly produced surf Bio. Lisa’s interview responses are used to provide the narration for the entire film. In a voice that still has a distinctive Virginia twang (where Lisa spent the first ten years of her life) Lisa spills the beans on the good times and the bad (there are some unexpected revelations). The fact we hear Lisa narrating her own colourful tale ensures the whole film experience has an honest and authentic feel, while the well-handled use of laid over footage means we don’t spend the entire time zoned in on a shot of the subject sitting in a chair.

Fortunately Lisa’s ascension to fame took place in an era when everyone was mad for the cam’ corder. In the late 80s and 90s, the period where a lot of the film’s footage is derived from, everyone was a kid with a new camera toy – just press play and see what happens. Lisa herself was a prolific filmer and much of the footage makes you feel like you are watching a home movie. The result is a level of intimacy with the subject you just don’t see in modern surf clips, where filmers are generally content to point and shoot the action and edit out any hint of personality.

It’s the home handycam/video that delivers the real insight into Lisa’s formative relationship with Californian pro surfer, Dave Parmenter, and also takes us inside her scandalous and life-changing involvement with then head judge, Renato Hickel. The abundance of surf footage also means we get to see Lisa’s groundbreaking surfing evolve over the years. The raw, fins-free ability is always apparent but as Lisa enters her era of world title domination you can definitely see her approach become the kind of  polished and progressive act that ultimately redefined women’s surfing.

Another of the film’s defining features is its use of animation to dramatise several of the crucial events in Lisa’s life. It’s a welcome creative effect that provides a stimulating diversion from the surf footage and the standard interview shot.

While the struggle for women surfers to grab the limelight and secure a decent pay cheque in a male dominated era are addressed, they’re not concepts heavily dwelt upon. The core theme of ‘Trouble’ is arguably more universal – about how one person can overcome a wayward youth and serious adversity to achieve greatness. That said many of the obstacles transcended by Lisa on her path to glory are not the kind of problems men face, as you will discover when you watch the film.

The pricklier questions about the evolution of women’s surfing were put to Lisa after last night’s premiere at Randwick Ritz cinema, when she took part in a Q and A session, which was compared by Nick Carroll. Asked about the recent introduction of equal pay for women surfers Lisa cheekily quipped, “It almost makes you want to divorce your husband, go train and win again.” Meanwhile it was left to another surfing great to put Lisa on the spot. From the back rows Layne Beachley probed, “What do you see as your legacy?” A laid back sounding Lisa obviously hadn’t really thought about it too much and danced around the question before saying, “I don’t know, to surf like a guy and look like a girl.” Now, that comment probably opens up a whole can of worms for those who like to academically dissect things through a politically correct prism, but it’s just what Lisa said when Layne put her under the heat lamp.

Whether you are a girl or a guy this is an entertaining and inspirational film that delves well beneath the glossy veneer of censored, WSL broadcasts and sponsor-plugging web/social clips. There are probably a whole bunch of other stories that could have been told but ‘Trouble’ definitely gives us enough to remind us that pro surfers are real people and not just floating billboards.