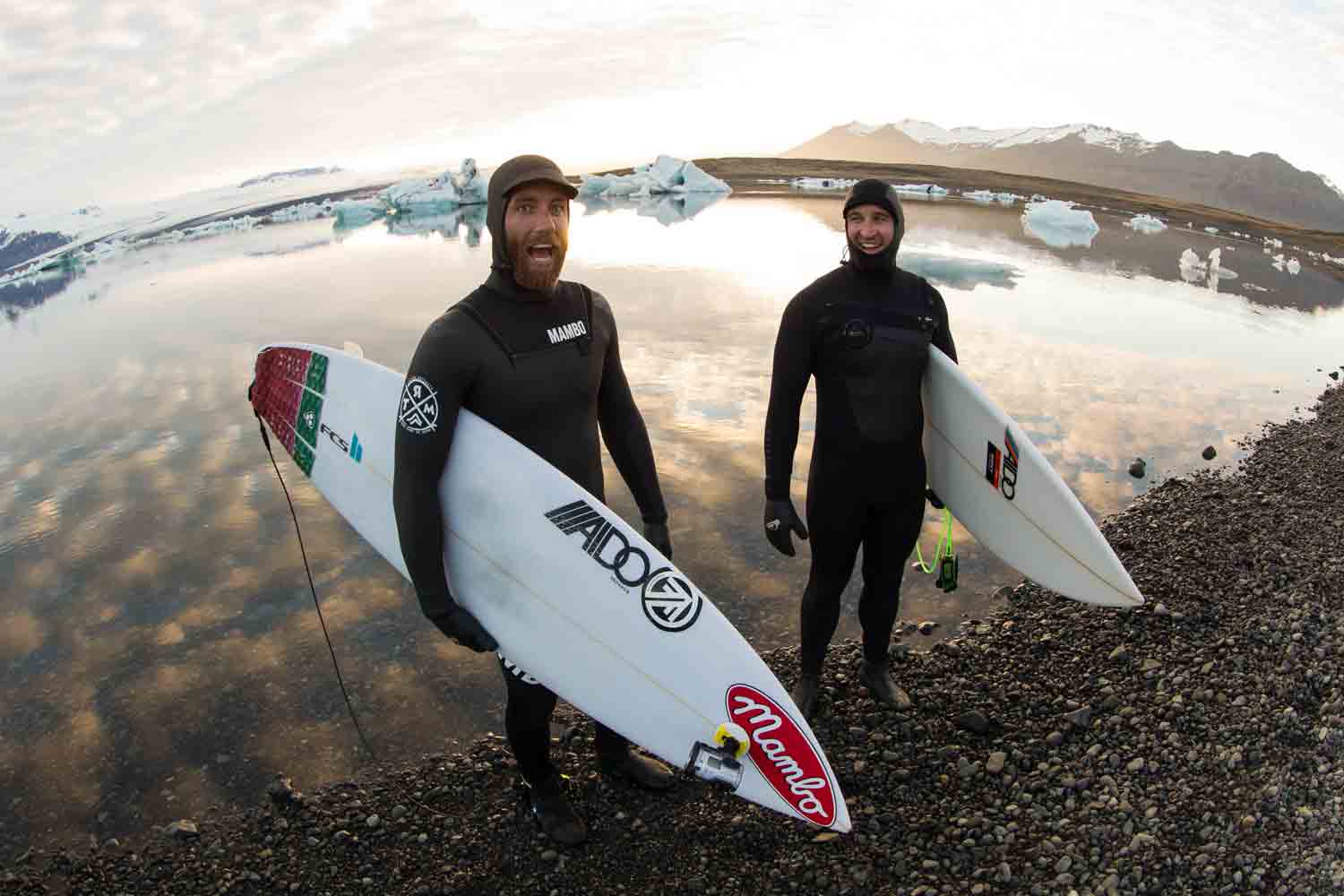 A movie that makes you want to jump on a plane and go!

Blake Thornton and Matt Gilsenan grew up around Maroubra where apartment blocks tumble towards the coast, the shadow of the city looms large, and the bump and grind is hard to escape. However, from a young age the duo plotted adventures together, determined to get a different perspective on life from the concrete-framed one they knew.

Blake eventually became a Pro Surfer and Lifeguard while Matt pursued his trade as a carpenter/builder, but they never stopped travelling and documenting their exploits. When an edit on a trip to Mexico received an overwhelming response online they were inspired to make Chase that Feeling, a long-form film that would see them venture to Iceland, Tahiti, Alaska, Canada, New Zealand and Australia. Almost ten years after starting production, they’ve released a film that will have you booking your next trip before you make it halfway through the viewing.

While the surfing, snowboarding and sky-diving footage is wonderfully shot, this is anything but a straight-forward action-sports film. Don’t expect voiceless, highly-strung, elites who care for nothing but the cut of their jeans and landing the next 720. Instead, it’s more about two mates gallivanting around the world, devising the ultimate bucket-list and engaging in plenty of banter along the way. The end result is something far more relatable and inspiring than a purely performance driven surf film, which can sometimes make you feel hopelessly inadequate and like giving up surfing altogether and taking up say, ultimate frisbee or horse riding. Against a backdrop of stunning landscapes and ocean settings the two main characters, and even the pro snowboarders who drop in for cameos, are portrayed as relatable humans chasing exceptional dreams, rather than highly stylised, otherworldly figures.

Chase that Feeling creates the very real sense that it could be you surfing in Tahiti, jumping out of a plane, heli-skiing in Alaska or paddling out at midnight in the Arctic Circle summer. “We liked the idea that you can still work and be based in a big city but have this other life,” explains Blake Thornton in relation to the philosophy that underpins his life and the making of the film.

Blake admits that he and Matt aka Gilso, had some roughly-sketched rules about where they wanted to go and what sort of film they wanted to make. “The locations had to be a little off the usual track, we could surf and snowboard (ideally), and it would be a challenge for one or both of us, and we had to have either been and loved it or long desired to go there.”

In Chase That Feeling, often it’s the candid, in-between moments that deliver much of the entertainment and humour. “We knew there was something special there so we filmed everything,” explains Blake.

There’s a classic moment in the film where Blake, who is far from confident on a snowboard, is dumped on the peak of a near-vertical, Alaskan mountain by a chopper, alongside his scheming mates. I won’t reveal how it plays out but the reality of the moment – horrifying for Blake and hilarious for his friends – is captured with brilliant candour. “It was easily the most vulnerable I’ve ever felt in my life,” insists Blake. There is always going to be times in life where you are scared and that fear can stop you from accomplishing a lot and there is a bunch of moments throughout the film where we are both terrified but suck it up and have a go.

The keep-the-camera-rolling approach also ensured editor, Colin Clarke, had lots of raw material to work with and could tell a story with layers of meaning and emotion.

Filmed over seven years, the film doesn’t dodge the fact that between trips a lot can happen in a life in that time frame – people die, parents get old and jobs evolve. There is more than one tragic dimension to the doco’ and while the mood certainly turns sombre these scenes help reiterate the key message – that complacency is perhaps our greatest crime and you should do whatever it takes to pursue the trips and experiences that you dream about. The emotional highs experienced while descending a mountain in virgin powder or pulling into a Teahupo’o barrel are given their context by the inevitable twists and turns that life takes. Ultimately, after two years of rigid, COVID travel restrictions ‘Chase That Feeling’ unshackles the imagination and reacquaints us with the wonders of the world. What’s more fun than descending backcountry mountains, and plundering world-class waves with a mate; all the while pursuing the kind of new sensations and experiences that are only found on the road? The movie might be just what you need to break the post-COVID inertia and kick-start your own travel plans.

Click here to stream or purchase ‘Chase That Feeling’ !