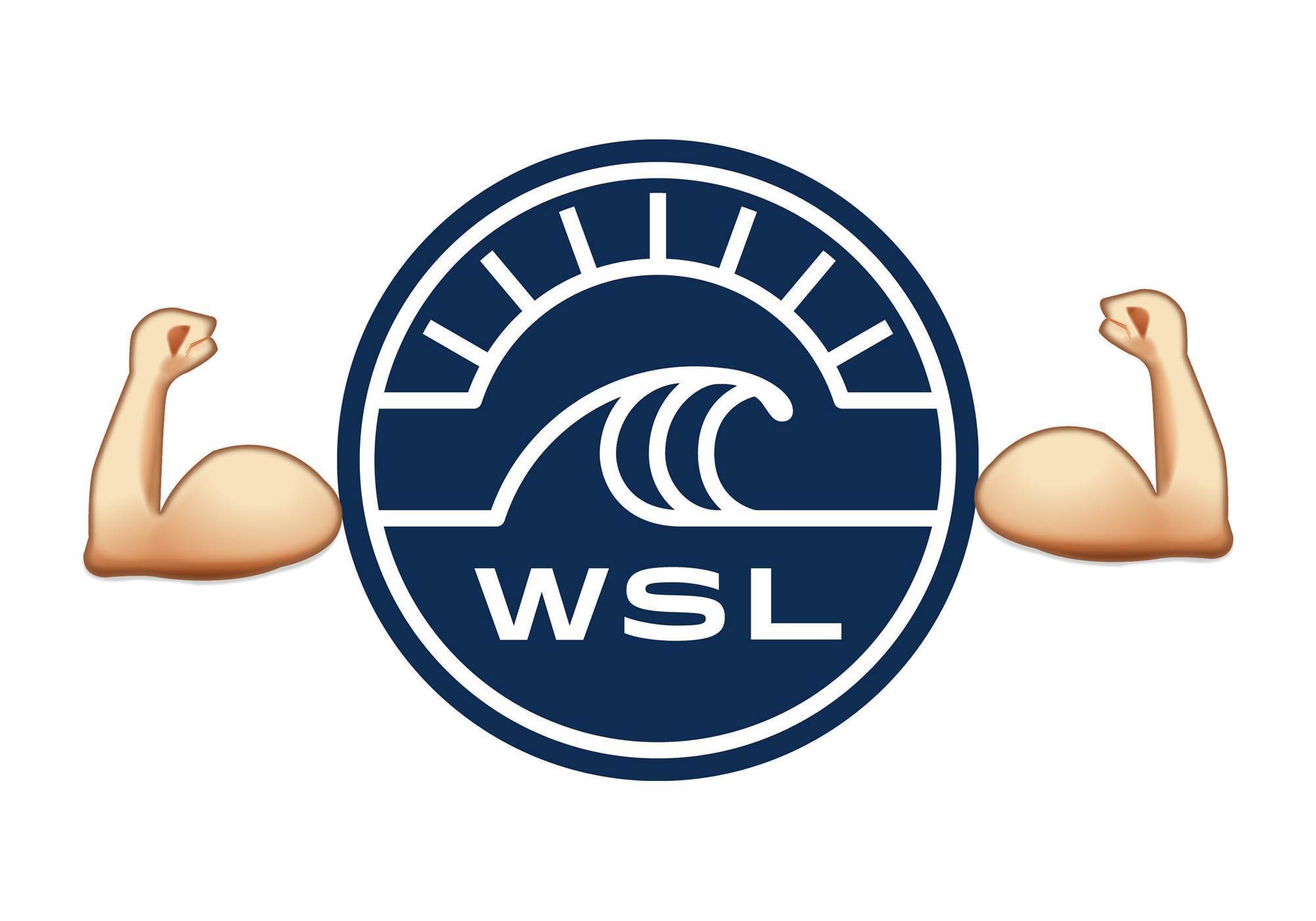 And waves goodbye to Westerly Windina

Former pro surfer and contest innovator, Peter Drouyn, has dropped a double bombshell on the eve of the Quiksilver Pro. Drouyn, who became famous in recent years for assuming the female identity of Westerly Windina, has decided he’d rather be Peter again. And now Peter is claiming Kelly Slater stole the wave pool concept he patented in 1979.

In an email to Tracks Peter said that Westerly will be ‘sorely missed’ but was much more concerned with the wave pool “heist” than any discussions about gender identity. 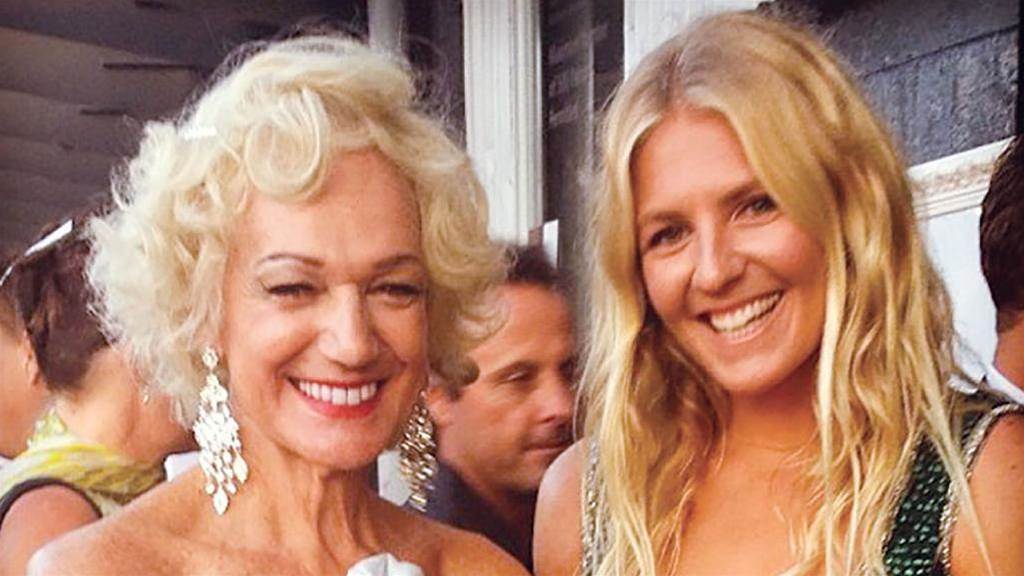 Labeling the episode as SLATERGATE, Drouyn, launched a viscious attack on the eleven-time world champion, in an email correspondence with Tracks.

“I have perused Slater and Fincham "Wave Generator" official patent and there is no doubt it is in every respect copied in design device bottom contouring, propulsion reverse channeling angular movement etc etc. includes wording from my patent which encompasses all my important data on dynamics of flow.

There has been an infringement notice given by a Greg Webber from Australia to Slater and Fincham, to which has been denied on the basis of type of wave generated, "solitary waves" which is my type of wave. Webber's "wave" is not my wave – but Slater's wave is my wave – taken from my 1979 patent Wave Generators which incorporated two types of devices both of which are used by Slater's "wave park". It is abominable, disgraceful! that this man whom I gave trust to has stolen my work for his ultimate gain. Not even a mention to me a thank you or a rightfully requesting my association in consideration. He said he would keep in touch – he hasn't and never intended to.

Slater knew what he was doing all along – he probably told Fincham who in all probability has perused my patent to discuss technical engineering data with colleagues. Because my patent had expired they knew they had legal freedom to utilize my patent system: they cleaned it out, copied it and claimed patent rights in the States,

"SLATERGATE" won't stop here. He has done the wrong thing…crossed way over the line…and the wheel will turn. He will be exposed.”

The tirade against Kelly and the WSL continued in further correspondence.

“I wrote two emails, one to WSL and to KSWaveCompany by third person confidante, that it appears likely that the above may well be a copying of my patent of 1979 (though he would know it had expired and free access given to peruse it. Being in Queensland at the time would have given him opportunity – in light of my speech to the crowd about the future of wave stadiums, and Slater's consequent talk to me after my speech,  relative to his enthusiasm at the time.

… I feel I may have been robbed again, and without even an opportunity to be involved with his project especially given, he said "I would be involved " if he got the prelims going.

So now I suffer once more. Each time I hear a copycat has taken another piece out of my soul…a piece of my heart…a secure  future taken from my son…I am called once more to hang on and take it in the face again.

Why do people do this to me? Einstein wasn't rubbed out of the picture and replaced by a Tom Pinnocio. No they were civilized people sharing involvement for the betterment of us all…not for super- greed… super-plagerism…super ego.

And because I am civilized I gave too much away for a disguised wolf like Kelly Slater to prey on me.

WSL and he and silent partners have united in corporate deal to take my "dream" to the public especially competition.  Both of them now stand without honor…without mercy…and without truth. They are readying themselves for a new "fields of future surf" I created, 36 years ago (a time when I was deliberately ignored again and.again).

I have been torn to shreds by these "salty" mercenaries and by perfumed pussies. What more can they harvest from me?”

Meanwhile colleagues also confirmed that Peter appeared at the recent WindanSea boardriders reunion as Peter and not Westerly, and signed copies of books as Peter Drouyn.

Formerly Westerly Windina, Peter Drouyn was back as one of the alltime surfing greats delivered an amazing heartfelt speech at the WindanSea Reunion. Thanks to Luke Sorensen for the photo -watch out for full story in LiQUiFY www.liquifymag.com Thanks to everyone who turned up at Currumbin RSL for a colossal Reunion. It was such a great night!

“…the other night I stood in front of a room filled to the rafters of ex and current Wind n' Sea surf club members, their associates and wives etc. I expounded once again the fundamentals of my future for surfing in stadiums. It met with great enthusiasm and five hundred signed books, extended hydraulic smile. and photo selfies. All the while unknowing that over several years I had been betrayed by a person I might have trusted. Now I struggle for justice…if only, simple recognition, shared communication, civilized association in innovation … Kelly Slater is not an innovator…NO…he's a front man. That's why I believe he has sort every which way to create my dream and leave me as the "Man Who Never Was"… never existed.

I am gutted at this man's contempt for civil respect and decency.

There would now be seen also, a cause to emulate Peter Drouyn, in excelling his surfmanship past normative age past perhaps even Peter…though he's still got a very long way to go, if records are anything to go by or be believed. He's seen me as a surfer to put to bed once and for all and what better way than to have millions of dollars, a sweetheart American society, ready made assistance from engineers and perfumed pussies to do so.”

In his email dialogue Drouyn explained that his initial attempts to be formally recognized for introducing man-on-man surfing had failed and suggested that Slater’s release of the wave pool has only added insult to injury. 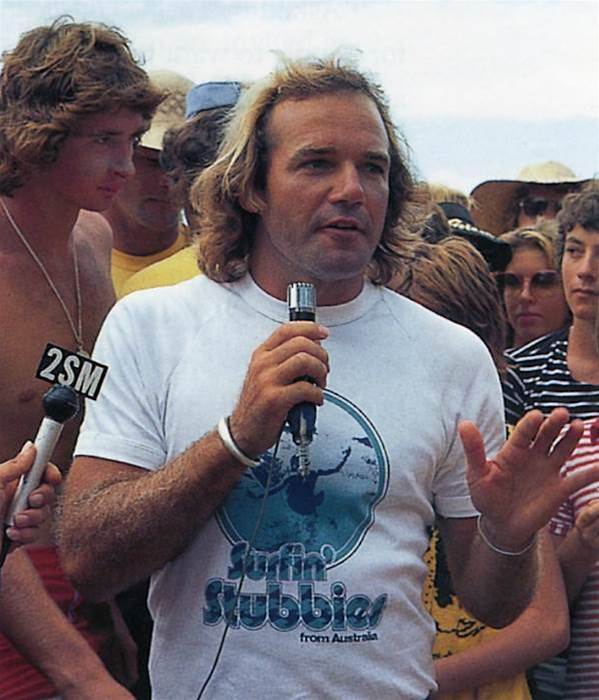 Drouyn at the 1977 Stubbies event where he introduced man on man surfing. Photo : Merkel

“…My short list of 'fundamentals for surfing's future' this time my wave – generating patent created 1979. The last siege recently to struggle with – to claim rightful copyright on my "Man on Man" (or one on one) surfing system back dated 1977. That has ended in a stalemate – the USA copyright office has refused my claim on "swampy" grounds…

Now "Slater-Gate". Kelly Slater and his magnificent heist – one better than the 'Great Train Robbery'…

In my mind. I have no doubt I've been carefully hijacked by the this 'wolf in salty disguise'. I've done my research last two days after finding out from a tip off he had secretly gone west and created a "wave pool" with a team of engineers several years ago – A purchased a lake – B. split it in two – C. drained water into one half, D. concreted the dry bed of the other, E. made bottom contours, F. planted a device propulsion mechanism at one end, G. refilled the dry half, H. planted solar panels along its width, and bingo, fired it up. Cloak and dagger stuff. Like planning a crime. And I dare say a nod and a wink just short of…”

Looking into the Future from Kelly Slater Wave Co on Vimeo.

Drouyn obviously feels that there has been a miscarriage of justice and suggested he is willing to defend his claims against anyone and suggests Kelly has adopted the same name that he used for his original wave pool concept.

“I will readily sit beside anyone esp with technical repose to identify the science and machines.  By the way he now calls his latest patent attempt Wave Generator the same as mine.  I have links to the US patent office.”

Finally Drouyn made an appeal to the Australian sense of a fair go, in his quest for support and recognition he feels is well overdue.

“Surely Australians will now come to stand up beside me and say "enough is enough – we take care of our own too!"

My son needs help and I live poorly in drudgery and exiled hope. When will the world say to me "Thank you. Thank you for your surfing innovation, surfboard innovation, competition innovation and now your wave generating innovation."  Is it too much to ask Australians to stand up and be counted? Our country is in dire straights – unless people like Peter Drouyn are recognized at the highest level {as are Americans} then the country and its people are crucifiers of their heritage.”

It will certainly be interesting to see if Kelly has anything to say in response to Peter before he paddles out for a man on man heat at the Quiksilver pro.

Liam O’Brien is On Tour.

The guy they call LOB just landed on the CT.