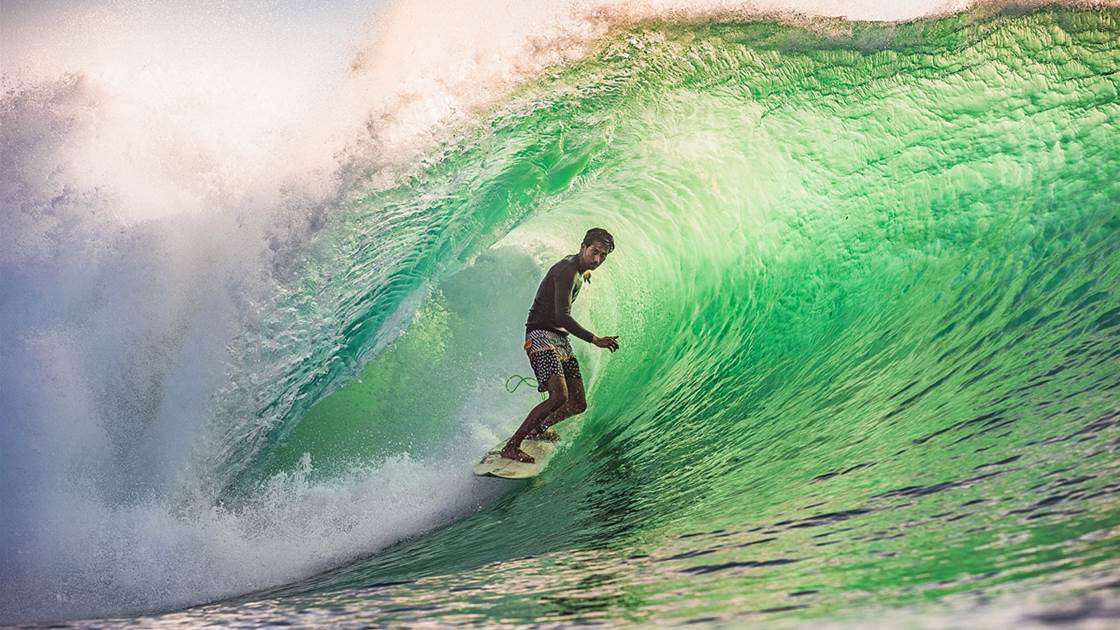 When a recent swell hit Bali's Padang Padang access points were still blocked. A few of the locals did whatever was required to get out there.

By Rizal Tandjung and Rahtu Suargita (As told to Matt George)

With beaches beginning to open up, and relentless swell pounding the empty reefs of Bali, Padang Padang was the undeniable choice for the island’s hottest local surfers. But there still remain some tricky access challenges like having to carry your phone in and scan your vaccination status at all access points of most breaks. Still, with this recent swell, where there is a will there is a way.

Rizal Tandjung: We all knew Padang Padang was firing but the challenge was getting to the line-up. We are all vaccinated but not everyone has a sophisticated phone all charged up and ready to go. Funny thing was, everybody figured it out and the line-up turned into a reunion session for what I would call the Bali All Stars. We had everyone from the north, south, east and west in the water. And a lot of us had not seen each other for months, so it was almost a family reunion out there”

Rahtu Suargita: “I was in my office watching Padang Padang on the Surfline camera and I was just grinding my teeth trying to figure out how to get out there. I finally just got my vax paperwork and hopped on my bike and went for it. It was so damn big and with the glare on it, I thought I was the only guy there. So I hopped the bridge, pushed the bushes aside and found the old overgrown, haunted stairs, and picked my way down to the beach. The waves were huge. So I thought I was paddling out by myself. Until I got closer and realised I was the last guy there. All the superstars were already out and they were hungry as wolves”.

Rizal: “I was lucky enough to walk through a friends private property to get there. But it was hilarious looking over into the jungle and seeing hero’s like Mega Semadhi and Bol Adi Putra and Garut Widiarta bushwacking their way down the cliff. Everyone was just doing anything they could to find their way. And there was plenty of desperation because with the wrong tides this day it meant the golden hour was only gonna last about three hours, maybe 3pm to 6pm”.

Rahtu: I think I heard of some guy who even threw a rope off the bridge to climb down into the valley. And it was crowded, sure. At one point I think the count was over 50 people in the water. But it was really the only choice on the island, so I was stoked that the vibe in the water was that we were all survivors or something. So there was a lot of laughter…until those close-out sets bombed in, that’s when the laughter stopped”.

“I THINK I HEARD OF SOME GUY WHO EVEN THREW A ROPE OFF THE BRIDGE TO CLIMB DOWN INTO THE VALLEY.”

Rizal: “ A pecking order was immediately established. It was the only way to deal with the numbers. There was the A, B and C list surfers out but no one was complaining about it. You know, a close-out set at Padang Padang is so rare and so heavy. We’re talking 12 foot and you are just scratching for Java at that point and then boom…boards flying everywhere.

Rahtu: “Even though the session felt like getting the band back together, you still had to show your teeth to get a wave. In that tide window you only needed one wave an hour to make your day. Padang Padang will give you a lifetime in one. The waves had a lot of water in them too, very west, and the barrels were just so huge there was room for two. Al ot of waves were ridden together. Except maybe the Uluwatu guys. They are used to giant walls”.

Rizal: “I know a lot guys coming in at dark were happy to make it back in. But talking to everyone afterwards the vibe was so good, yah? Like we had all done something special. With access tricky it felt like we earned it, you know? Like we had all been through something special together. Like one of those sessions, you measure all the others by. For sure, because of the whole Pandemic thing, this was one that was going to be remembered forever”.