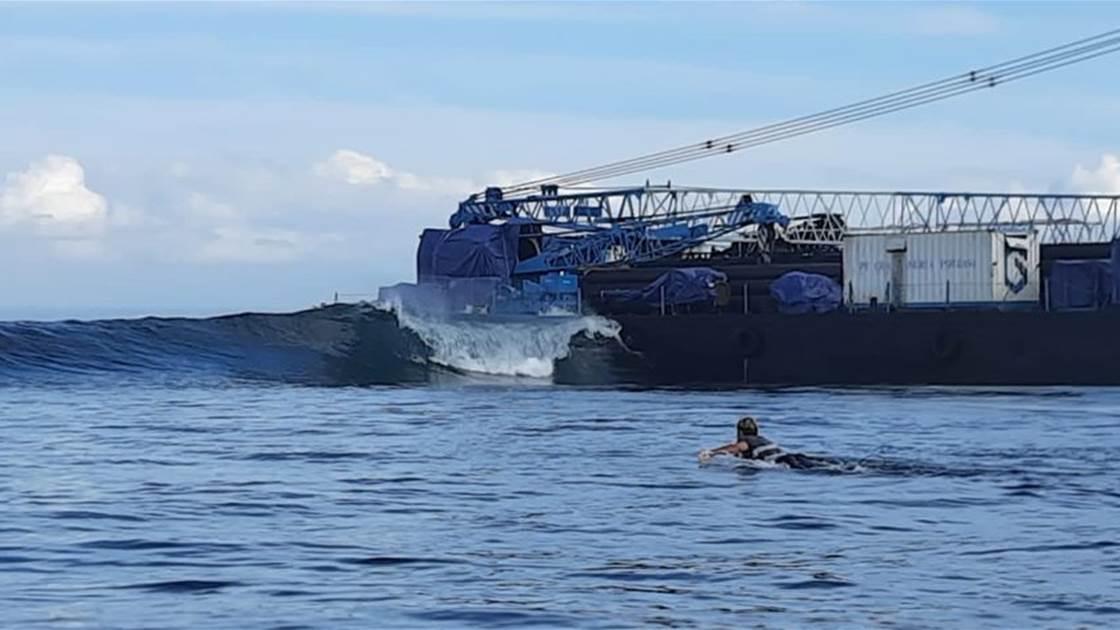 A sidewinder at Lembongan's 'Shipwrecks' bending off the barge that foundered on the reef last week.

LOCAL PERSPECTIVE ON THE NEW SHIPWRECK AT LEMBONGAN’S ‘SHIPWRECKS’

Will the foundered barge be a boon for surfers or an environmental disaster?

When a transport barge foundered on the reef last week at the break aptly known as Shipwrecks the surfers on the island of Nusa Lembongan wasted little time. The barge went up on the reef in the early hours of the morning and by daybreak boardriders were sling-shotting into wedges that ran along the edge of the barge that is approximately 80-100m long and 20-30 metres wide. “I looked out my window and thought a palm had washed out over the reef, then I looked again and went ‘oh my god that’s a ship’,” recalls Troy Sinclair who owns and operates the resort, Batu Karang on Lembongan.

The barge is not a self-propelled boat and therefore contains no engine or fuel onboard. It was being pulled by a tugboat, which was also hit the reef and is now sitting further inside. Although the details are unconfirmed it’s likely that the barge was transporting materials for the construction of a new bridge and harbour at Cennigan, which is separated from Lembongan by a narrow corridor of water. With a notoriously strong current running off Lembongan, boats often try and navigate closer to the coast where the undertow is less severe and the passage smoother. However, such a manouevre means you risk hitting the reefs off the island.

It’s obviously not the first vessel to run aground on the patch of reef. Back in the 60s a cargo ship foundered on the submerged stretch of hard coral and rock. When it became popular with surfers in the 70s and 80s the remains of the original ship still lingered and gave the wave its name – Shipwrecks. The boat carcass even provided the wave with a distinctive wedge effect. Since then the original wreck has been washed away, but countless other boats have run aground on the same treacherous stretch. “I’d say in the last two decades I’ve been here I’ve seen around 20 boats wash up there,” recalls Troy. “One morning I woke to see a whole fleet of Indonesian fishing boats stuck on the reef… but this one is certainly the biggest since the original shipwreck back in the 60s.”

While the absence of an engine and fuel onboard is a positive from an environmental impact perspective, it doesn’t mean the wreck won’t have potentially disastrous effects. Removing the cargo and dislodging the barge is not going to be a simple procedure, particularly when it’s still loaded with a crane and a stack of heavy containers. “In the best-case scenario they could probably unload the cargo, lighten it up, get some bilge pumps in and try and tow it off the reef,” suggests Troy. “… However, I can’t see how they can get a big enough boat in to unload the cargo, given where it’s located on the reef with waves breaking and shallow water.”

The exercise of removing the ship will be further complicated by the fact that it is no longer completely intact. “I went out and had a look in my boat and you can see the whole back end has been destroyed,” explains Troy. “There were waves breaking into the hull at the back…” Dragging a 100metre barge to deeper water or a distant dock is much more challenging if it has a gaping hole in the stern and is taking on water. “They might have to seal that up first,” hypothesizes Troy.

All reports suggest that plans are being made to tow the ship away, however, if a salvage mission proves too difficult and the wreckage is left to deteriorate of its own accord, then there is a real risk the lineup may become a minefield of scrap metal and sharp edges.

As for the wave itself? For the time being it’s certainly providing a renewed sense of novelty for those who are surfing it. According to local reports, the first one or two waves of a set are preferable as they deliver the distinctive wedge effect off the barge without the unwanted sidewash the boat creates after a couple of waves roll through. Shipwrecks has always been a wave heavily influenced by currents and tidal movements. There haven’t been enough swells as yet to determine the overall effects of the barge’s intrusion on the reef, but there may be unexpected long-term impacts on the wave. “When it’s bigger, it typically breaks a bit further out and wider of where the barge is now,” explains Troy. “However, if the barge stays, I think it will still change the wave when it’s bigger, just because of the way it impacts the way water moves.”

Watching how this one plays out will be interesting and we can only hope that Lembongan’s Shipwrecks doesn’t become some kind of scrap metal thunder-dome. In the interim surfers will do what they do – react creatively to a random collision between nature and man-made objects and make the most of the fleeting scenario.

Brother and O'Neill serve up a celebratory clip for their new partnership.

A Sordid Tale of Theft, Betrayal & a Stack of Tracks Magazines.

The 3x World Champ has cited mental wellbeing as his cause for a break in competition. 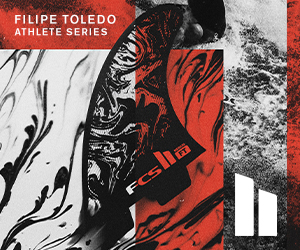 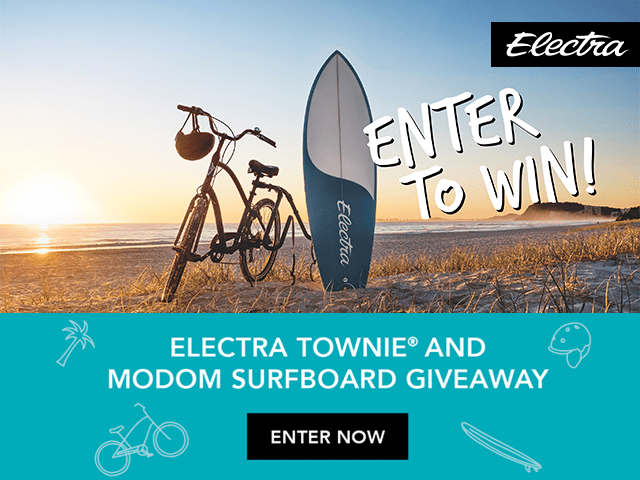