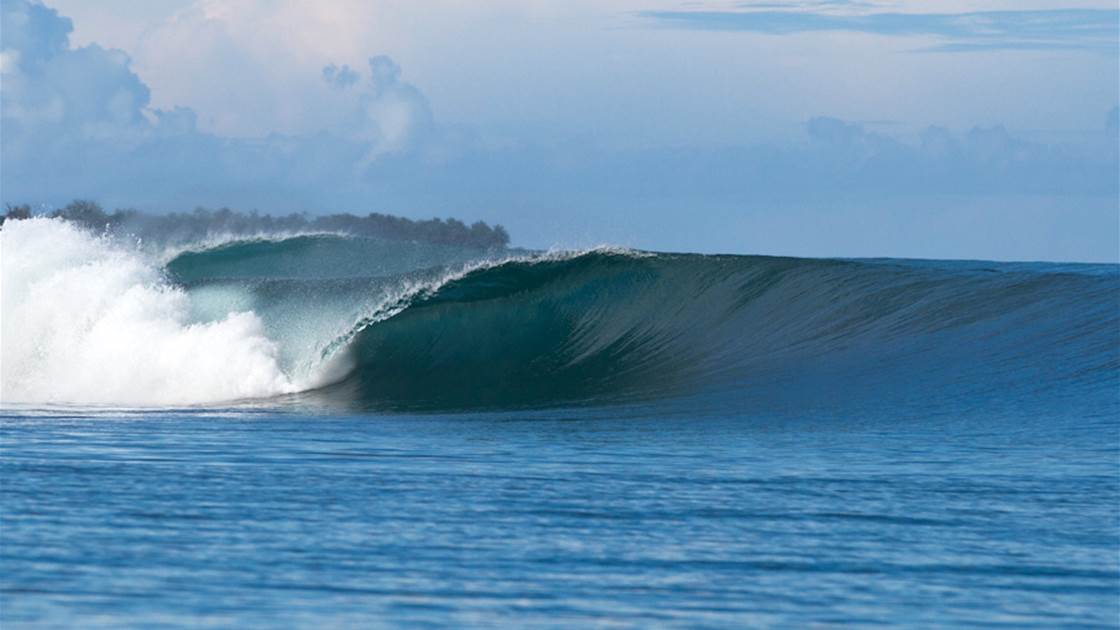 Macaronis is always in the conversation when discussing the world's most perfect waves. Photo: Macaronis Resort

LIFE IS GOOD AT MACARONIS

A mid-Covid dash to the Mentawais proves fruitful for this Indo-based, Aussie surfer.

The Covid situation is still serious in Indonesia, but the reality on the ground is more nuanced than is being reported in the media. There have been large virus outbreaks in Java and some other regional cities, but outside of these areas, the local people go about their daily lives, much like they always have. Mask wearing and hand washing are encouraged, but businesses remain open. Travel is permitted, but only if your documentation is in order. Vaccinations and recent PCR tests are all required.

As long as you are already in Indonesia, getting out to the Mentawais is possible. However, many of the camps are closed, and most of the charter boats are sitting at anchor. Some of the higher-end resorts remain open but have strict Covid protocols in place. I used to stay at the expensive places, back when I was a slave to western capitalism. Walking away from my poisonous office job was one of the most satisfying things I’ve ever done, but it’s had a material impact on my travel budget. In normal times, I would steer well clear of classy surf resorts. Especially when the local run homestay down the beach is a fraction of the price. However these are not normal times, and a few of the high-end resorts are currently offering steep discounts. The opportunity to surf Macaroni’s every day, while living in air-conditioned luxury, just seemed too good to pass up.

The Mentawai Fast Ferries have started running again, but it was fairly quiet down at the terminal. The large groups of western surfers, with their heavy board bags and excited chatter, were nowhere to be seen. Instead, small crowds of locals drank plastic cups of Nescafe, while stacking packages and boxes of freight. Mild seasickness and building anticipation curdled in my stomach during the voyage to Sikakap. Only two of us boarded the boat to Macaronis. Wind and rain combined with heavy lines of south swell to keep the onward journey interesting.

When we arrived, the resort staff greeted us with smiles and a complimentary coconut juice. It was a pleasant change from turning up to my usual homestay options. Only the bed bugs and stale bathroom smells are complimentary in some of the other places I have stayed. There was a rush to get checked in, then get the boards waxed and ready. I had one of those special Mentawai moments as we were cruising back out towards the break. The water was a perfect shade of turquoise blue. Coconut palms lined a nearby sandy beach. Plump fluffy white clouds billowed across the entire skyline. Surfing is always the focus when you visit the Mentawais, which sometimes makes you forget how beautiful the islands are.

Macaronis was maxing when we arrived at the break. Heavy lines of south swell were slamming into the reef and throwing wide unpredictable barrels. There were torrents of water swirling around, adding further chaos to the lineup. It looked nothing like the clean rippable walls you often see in surf videos. There was a small group of determined surfers sitting wide, waiting for the smaller ones. Occasional clean-up sets would come storming through, forcing everyone into a desperate bolt towards the channel. It was one of those sessions where you are constantly paddling and duck diving. Where doubt clouds your mind during every take-off. Where your frustration continues to build until mother nature finally gifts you an easy entry and a long makeable wall.

A boat from the resort was waiting in the channel for the entire session. There was a dull tiredness in my arms when I paddled up next to it. A helpful staff member assisted me aboard. I began to settle in, figuring we would be waiting for others before heading back. But my friend from the staff was already on the radio. A buzzing outboard could soon be heard in the distance. The boat arrived, and I was swiftly ferried back to the resort. I couldn’t believe it. A lifetime of surf-boat drama flashed through my mind. All those times I had to leave early because someone had hurt themselves. Or all the other times I waited patiently, while some struggling surfer tried to find just one more, and instead missed wave after wave. I was smiling to myself as we cruised into the lagoon and right up to the dock. Having your own private pick-up was clearly the way to go.

The swell backed off over a few days and Macaroni’s slowly started to show form. The wind was never really perfect, but the wave still held its shape, providing long fun walls even when conditions were onshore. Crowds were light, and sometimes non-existent. I happily surfed myself into a state of mild exhaustion, before returning on my private surf shuttle, then collapsing into climate-controlled comfort.

My standard diet on Indo surf trips had always been banana pancakes and various combinations of Mie and Nasi Goreng. These aren’t my preferred menu options, but at lower-end surf camps, this is what’s on offer. I quickly discovered that the food was much better at a proper surf resort. Lunch and dinner were restaurant standard, and you even got dessert. The trouble started when I realised the buffet breakfast was all you can eat, and there were often trays of bakery treats left out through the day. Along with being surfed out, I was soon often retiring to my room to sleep off a full stomach.

The swell eventually dropped out entirely, so I spent the late afternoons gently guiding a paddle board through nearby mangroves. Curiosity led me to a dusty box of DVDs, where I discovered some old seasons of Game of Thrones. My room had a disc player attached to a flat-screen TV. I was soon replaying scenes involving Daenerys Targaryen and gazing wistfully at the Dragon Queen as she conquered her foes.

Macaronis walls, a personalized pick-up system, and medieval maidens. What more could I want?