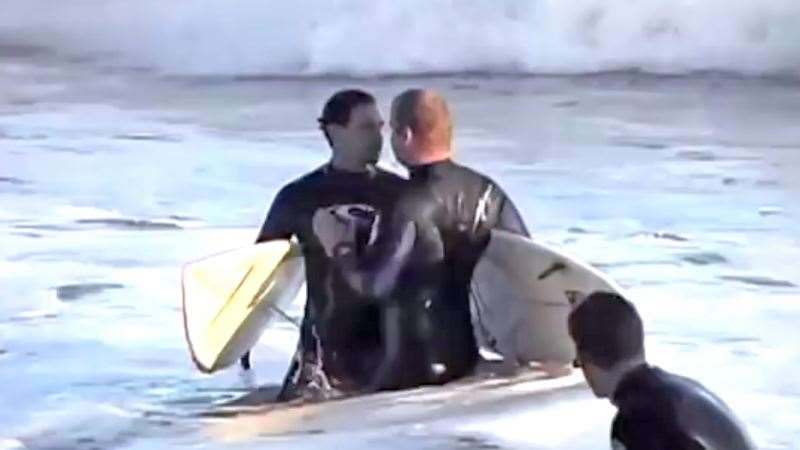 A semi-regular segment celebrating the most ridiculed and under-appreciated member of surf culture, the kook.

Defined by an inability to smile and an uncanny knack for making surfing look like the most frustrating experience this side of giving directions over a scratchy phone line, the middle-aged surf nazi hates longboarders, kneeboarders, bodyboarders, goatboaters, dolphins, Brazilians and anyone else ruining their idealised vision of the line-up, which, presumably, consists solely of themselves and their progeny.

Having come of age in an idyllic period before kooks existed—the 80s and early 90s, an era marked by fluoro wetsuits, webbed paddling gloves and an unhealthy affection for the mullet—he laments the decline of modern surf culture and takes it upon himself to restore a sense of order and respect to the line-up. This is generally achieved by swearing at the waves he misses and shaking his head whenever somebody other than himself blows a take-off. As a defender of all that is right and true in the water, he approaches his role with total commitment. Any perceived violation of the no dropping-in and no snaking laws, no matter how small or incidental, is considered a call to arms and followed up immediately with a torrent of verbal abuse. This can prove quite problematic when he himself has committed the initial snaking and thus been dropped-in on, or if a succession of ocean currents has deposited a hapless beginner up his inside. In the first case it can lead to the middle-aged surf nazi wearing a fist to the head, especially if he’s chewed out someone larger and more physically imposing than himself, and in the second, to the misconception that he’s suffering some obscure and unmedicated form of mental illness. The outcome outweighs the consequence, however, and the middle-aged surf nazi can return to the shore knowing the offending kook will think twice before pulling that shit out there again.

With such a wealth of knowledge to draw upon he’s become an expert surfing analyst, and can identify flaws in the highest level of shredding and the most perfect conditions. He still fails to recognise, however, that sitting ten metres further out than anyone else puts him out of reach of most waves and that a paper-thin 5’10 isn’t really a suitable board for anyone over twenty. Deep down, though, he’s just a purist who’s been forced into this position by the wrongs of the ignorant younger surfer, the greed of the arrogant older surfer, the sheer cluelessness of the delusional female surfer, and anyone else who seems to be doing it all wrong while simultaneously not giving him the respect he deserves. And it’s this last part that really stings—just how unappreciated the work he does is. It’s what leads to those rarely acknowledged moments of doubt and suffering, when the middle-aged surf nazi suspects he might be fighting a losing battle, that the sport of surfing is somehow moving past his control, and that maybe he’d be better off giving it up and turning to something more rewarding and pure, less prone to frustration—like fishing, or golf.

But these thoughts are immediately dismissed for the weak moments they are when he rocks up for his next session and notices the absolute chaos that has overrun the line-up in his absence. He sits and watches it a minute. He shakes his head. It’s possible he could just turn around and drive away. But no, No, NO. He steps from the car and reaches for his wetsuit.

Surfing needs him now more than ever.