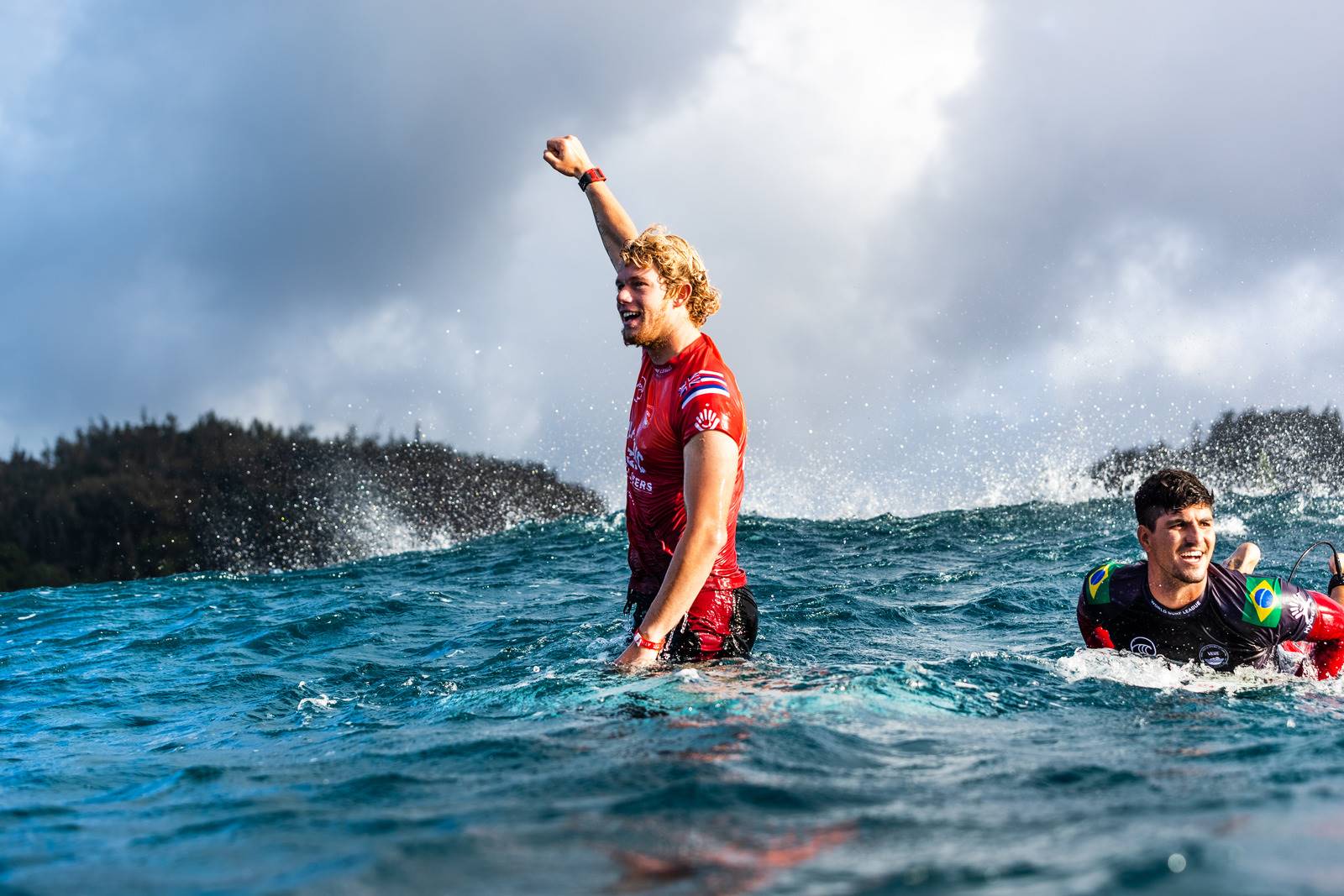 John John is a Pipe Master At Last

It began as a horror morning for the Australian surfers. In the day’s first super-heat, Kelly out-maneuvered, outsmarted and out-psyched Jack Robbo, a surfer more than half his age. More on that here.

Then as the storms cleared the rainbows landed firmly on the Brazilians. Italo was surfing like a caffeine-fuelled jackrabbit, hopping all over the baby-sized Pipe lineup to eclipse Ryan Callinan.  Meanwhile, Jack Freestone, an early event standout, had no answer to Medina’s omnipotent Pipe act. In the barrel and beyond the lip Medina had Jack’s measure. Once again the Oz crew were exposed for being a shade off the pace at the Formula One level. Perhaps the conditions favoured the versatile Brazilians, but if you show up to any CT event these days without a fully functioning arsenal of tricks and tubes then you are not really a contender.

The quarterfinals were a low-scoring, cagey affair aside from John John’s exhibition heat against Leo Fioravanti.  Within three minutes John John had plucked the best wave of the morning from a fickle, Pipe lineup. Leo Fioravanti let it go. A closeout by almost anyone else’s reckoning was an 8.6 runner for John John. If others know Pipe well, John is like an archaeologist who has examined every fragment of reef. He then made friends with the foam ball for an impossible exit and an identical 8.6. The final act in the JJ exhibition was a 9.07, which featured a savage frontside carve after the tube. It was a pleasure to watch but one wondered if he was peaking too early?

Jordy had the wave to win against Kelly in the early stages of their quarter – a gaping Backdoor pit with enough room for Jordy to swing a hyena in. However, he failed to exit and made major priority mistakes throughout the joust. Ultimately he went down to Kelly, who monopolized the priority late in the heat. Kelly ultimately posted a feeble 3.3 and a 2.9, proving it doesn’t matter how you win so long as you do. For Jordy, it was a missed opportunity to really affirm his status as a presence at Pipe.

The other quarterfinal highlight was Italo’s stoic effort to win despite being swatted on the reef at Backdoor. Ferreira came up with bright splashes of blood on his back and head to complement his shock of peroxide blonde. It looked like Johnny Rotten had been going too hard in the mosh pit.  Italo was definitely hurting, wincing in pain as he flung the rig through a mini rotation on a shorey. Despite being beaten up and a little unsteady on his feet, Italo still did enough to overcome fellow Pipe Master, Jeremy Flores. 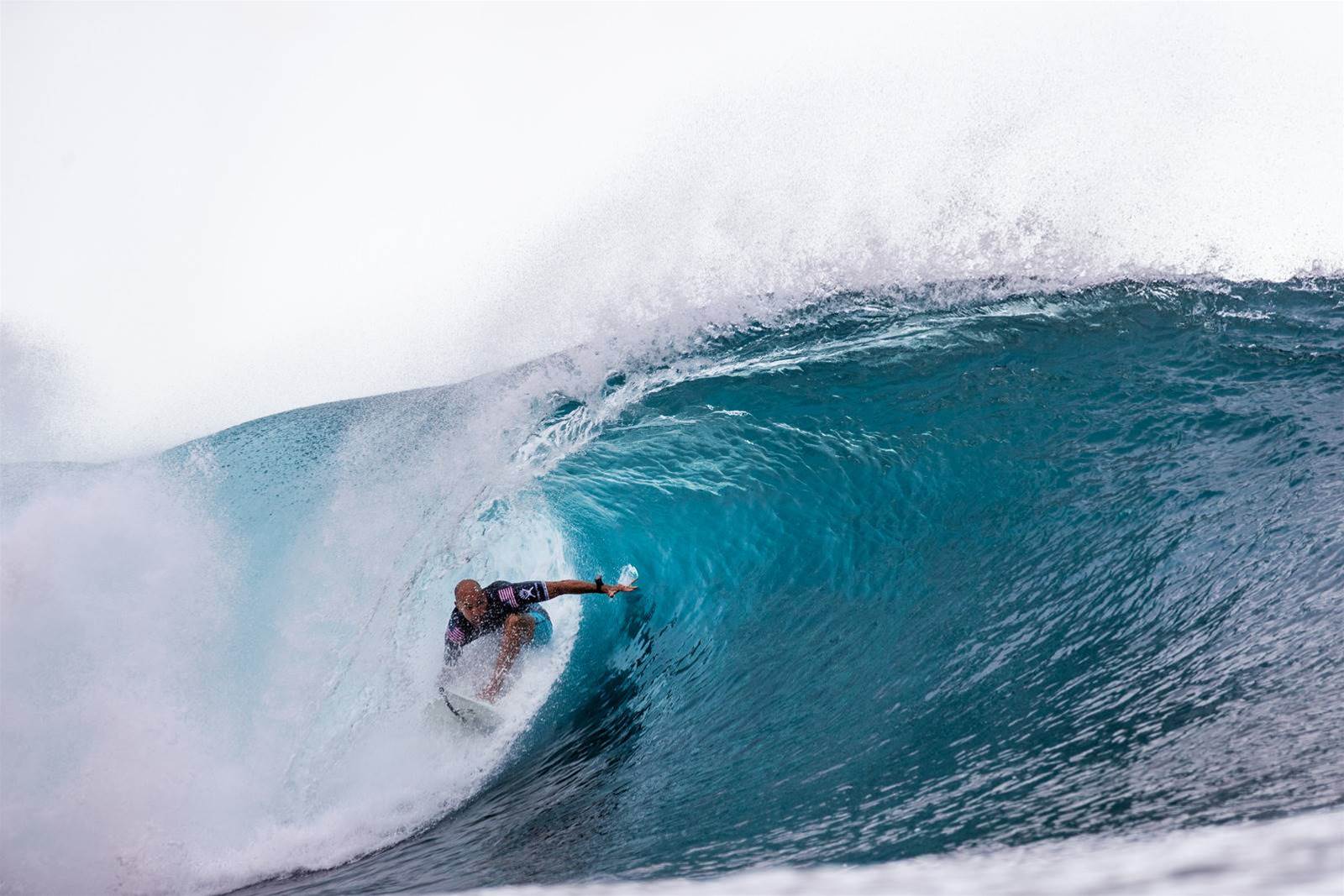 Kelly Slater, 48-years-of-age and still mixing it with the three best surfer's on the planet. Photo: WSL/Bielmann

In the opening semi between Kelly and John John the big question was, ‘Could Slater do it twice in one day?’ Overcome a younger competitor who was considered to be at least his equal in the tube?

Within minutes it seemed like it would be a classic, tube duel, reminiscent of their famous Semi at Teahupoo in 2014. Back then John John got the first one of the heat and Kelly the second. This time the order was flipped. The two, ledging left pits were difficult to separate but John John’s 9.23 was deemed more critical and almost a point better than Kelly’s, 8.33.

Eager to capitalize on the momentum, John John kicked out, grabbed priority and positioned himself perfectly for a Backdoor howler that took every bit of his ability to land the drop and bullock through. The finishing turn was like watching a skilled samurai wield a blade through a full-weighted swing. Kelly was on the receiving end of the blow, an 8.93 wound that meant Slater was left chasing an almost perfect score, a 9.83.

Kelly did everything he could to conjure a perfect ride, pulling in ridiculously deep on sets, but the exit signs eluded him. In the end John John could have won with his throw-aways. In a last-ditch display of showmanship, Slater blatantly burnt John John and finally made a Backdoor barrel. Florence dismissed the incursion and focused on the final.

If Kelly and John John rumbled from the get-go, Italo and Gabe (in their 2019 Pipe rematch) were forced to wait patiently for a wave worthy of their presence. Banged up Italo was wrapped in an inflatable vest to cushion any further contact with the reef and make sure he floated if he got hurt again.

When Gabe arm-dragged into a seven on a left it felt ominous, like wounded Italo would struggle to reclaim the momentum. However, resembling and sounding like a ninja turtle in his flotation vest, Italo responded with a 7.37.  But Medina pressed with a 5.6, freefall into a nugget. It was enough to see out the semi and set up a fascinating fixture with John John Florence. 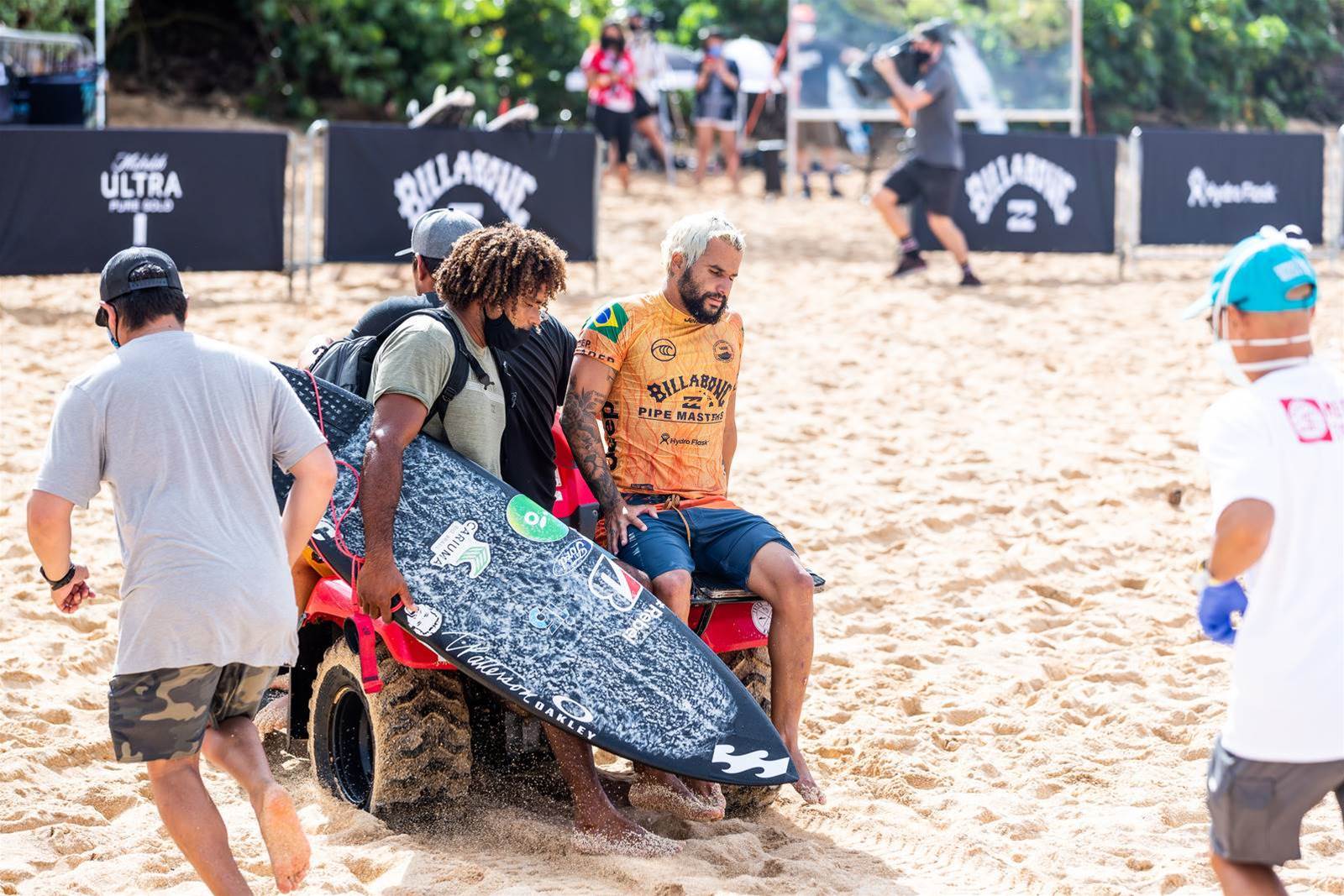 An injured Italo, being assisted from the water after his quarter-final. Photo: WSL/Bielmann

In the final Medina jabbed early with a pair of mid-fours while a sentinel John John waited patiently for something that met his very specific criteria.

At the 23.5-minute mark, John John hit the trigger on a funneling left but got swallowed by the foam ball. When he popped up to see Medina huck into a 6.67 and go for further in front, it seemed like the Pipe trophy would elude him again.

With eleven and a half to go John John leant over the ledge on a steep left and dialed the effect the judges usually want for a big Pipe score – you have to make it look like you are not coming out before you do. However, the arbitrators only dropped a 6.17. It was achingly, 0.17 short of what he required for the lead. 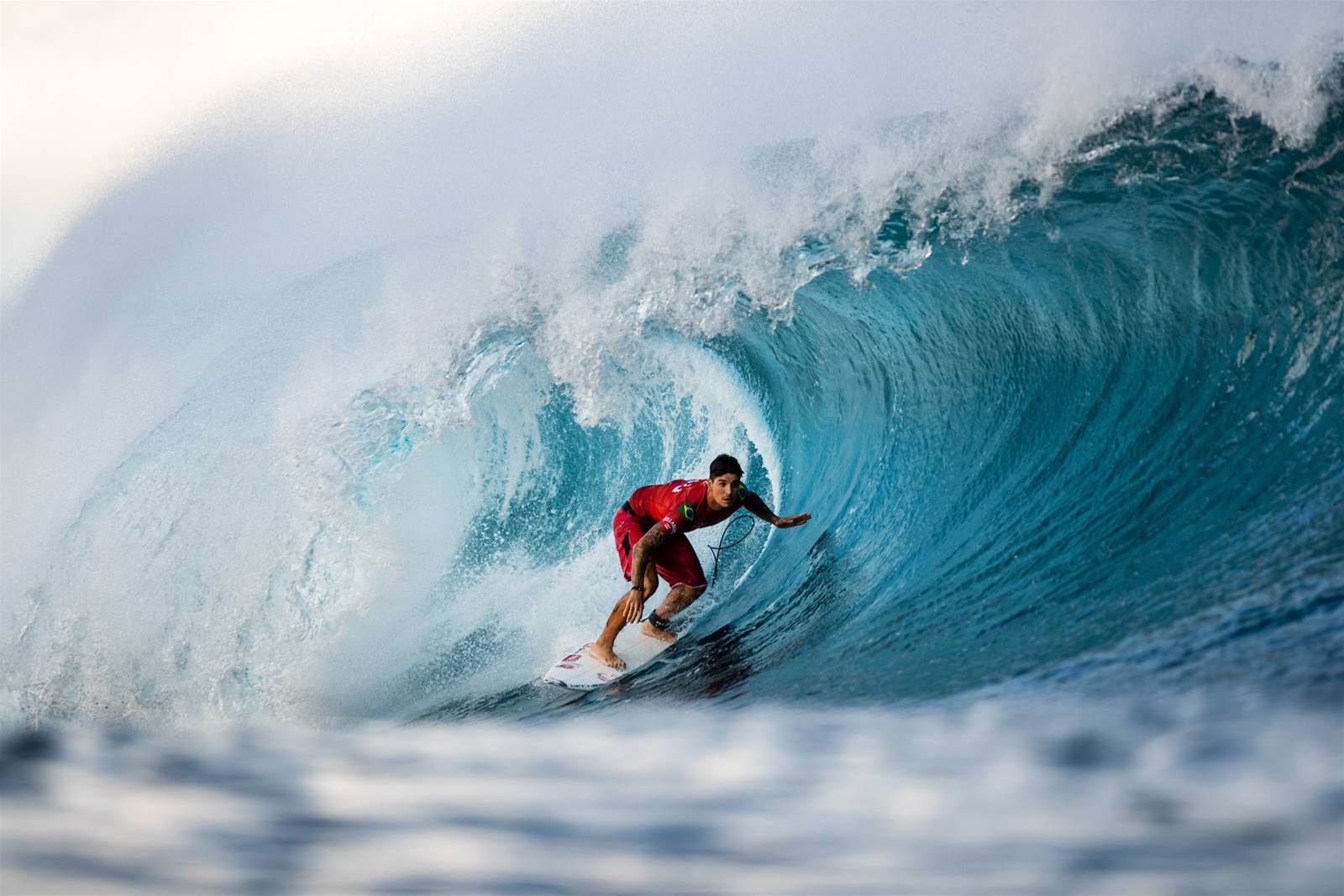 The fact an 'out of sorts' Medina can still make the final of the Pipe Masters is testament to how dangerous he is. WSL/Bielmann

With five to go John John only needed a 4.94 when he swung on an insider under priority. It was a tapering wave with a smaller down the line barrel but he sold it well with a critical hook under the lip. The 5.57 was enough to get the lead but he kept swinging on an inside, Backdoor zipper. John John masterfully turned a two-second barrel into a six-second one, again stalling in the tube long enough to be written off. The wave took him an inch further in front at a critical stage.

As the hooter sounded, for John John it seemed relief almost topped elation as the primary emotional response. At last, he’d claimed the event he was born to win and he’d done it against his archrival, his post-heat comments revealing that having an opponent like Medina is what keeps him in the game. 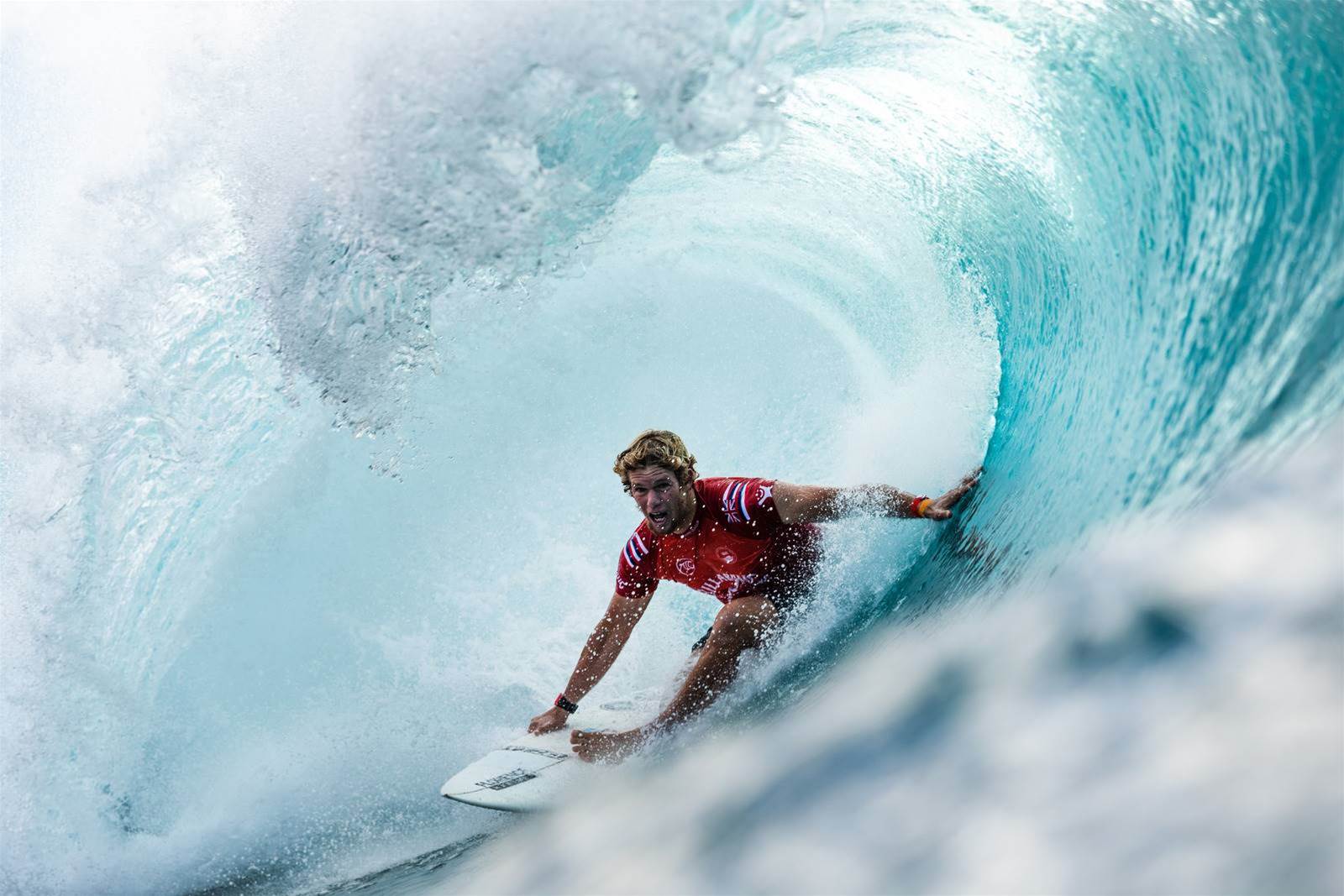 A Pipe Masters title has been a long time coming for John. Photo: WSL/Tony

“It feels so good to win… I’m stoked to win against Gabe because competing against him is why I compete.”

On a dramatic, final day, John John was the most deserving of Pipe Masters and after a terrible, sequence of events – shark attacks and Covid cases – the WSL had pulled off the impossible ride through the first leg of their new Hawaiian season. As the froth settles we find the usual suspects – Medina, Florence and Italo – at the top of the rankings but for the first time in years, Kelly has a genuine keeper result (a semi) to kick off his campaign. Leo Fioravanti was commendable with a quarters finish, while The Australians will have to lift to another level if they want to be in the upper echelon conversation. Robinson and Ewing performed exceptionally well at Sunset to qualify at the end of 2019. Hopefully, they can turn it on again when CT competition returns to the fabled right on Jan 18.