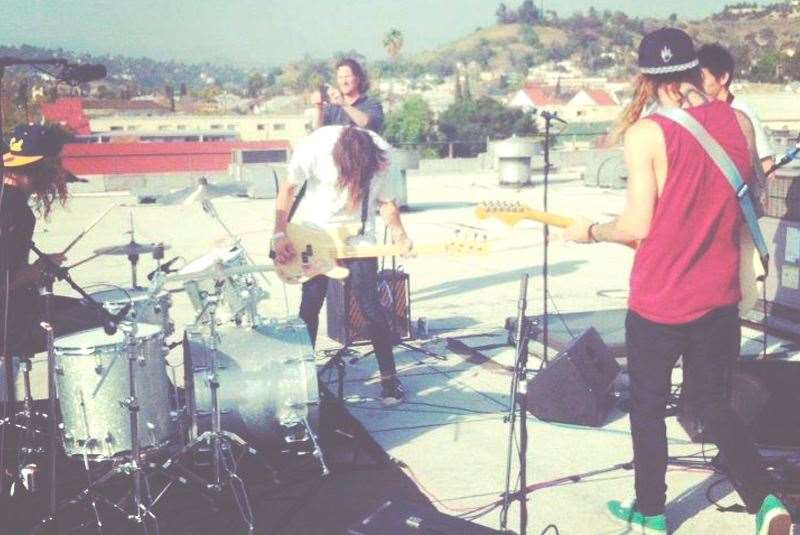 Dune Rats set out on their global rampage.

I was supposed to go meet the fellas from Dune Rats for a few frosties at a pub in Sydney but I kooked it and had to do heaps of other pointless shit that week as living in a city commands you to do. Brett Jansh, the bass player picked up the line and his tales of traveling the world playing music certainly made me question my priorities.

Sorry I didn’t come down last night, did you get.. f*#ked up?

Brett: Aww yeah, we had a few good beers, it’s actually the first time I’ve had an Australian beer on tap for a while it was sick…

Oh yeah? Where have you been?

Um yeah we’ve been in America for the past two months.

Tides, I’ve actually been cooked with you guys before at a sailor jerry’s house party.

(Laughs) What that mad crib with the bar in it and all the shit on the walls?

Yeah I’m actually childhood friends with a few of the boys in bands from Byron that I’ve seen you hanging with like Feeling Dave.

Yeah those boys came with us the whole time we were playing through America just recently. They’d even jump up and play a few songs before we started, it was sick having them there.

So did they just tag along and play some tunes whenever?

Yeah they got their own RV and came along with us. We couldn’t get them on the bill but they’d just open up (laughs).

That’s sick. So would you choose the right sort of company and people to cruise around with on tour over the best support acts available at the time sort of thing?

I guess we’ve been trying to figure out what works best but it’s definitely more fun having your friends around. Then when the tours done it’s like brothers in arms type of thing.

Yeah for sure. I heard you were all cruising in Hawaii before America?

Yeah BC and I were getting our work visas for America and they restricted us from the mainland for only 24 hours so we pretty much flew to Hawaii into Waikiki, got pissed and had to fly back, we didn’t even get to see the north shore – spewing.

Yeah and it made it easier to get into the country (USA) too. Every time we’ve gone to LA going through customs is always daunting.

Yeah it makes you paranoid going through there, they’re gnarly.

Yeah man they ask you the weirdest questions, when we went through from Canada to America in our car the officer at the border ripped apart our car. He fully made us feel like we had done everything wrong and did have pounds of cocaine that we were trying to transport or something like that. It was f*#king psycho.

Yeah it’s weird over there, it’s a weird set up…

Yeah fully. But it’s amazing as well its like; it’s so fucking crook that it’s sick.

(Laughs) Yeah, on the cheeseburger diet with cheap beers and shit.

Yeah I came back fatter. BC’s not fatter.

So how did you, Danny and BC all meet? In Brissy?

Yeah, Danny and BC knew each other for a while before I met them; I just met them crossing the street. And then Bleeding Knees Club did tour of Australia and Dunies were the support so that’s when the whole thing set off. I was playing drums for Bleeding Knees and the Dunies didn’t have a bass player so I just ended up playing bass the whole time.

Sick. So that’s kind of the beginnings. How’s it all going now? Is everyone still having a hell time?

Yeah every ones having the hellest time for sure. We’re frothing that this album is done and we’re at this point were its ready to be released and we have these tours coming up in Africa, Europe and Australia. Frothing.

Big year coming up. You reckon you’ll last as mates and be friends in 20 years?

(Laughs) Yeah we’ll definitely be mates I don’t know what we’ll be doing in 20 years though fark that’s pretty old. Oh that’s skitzy old, I don’t even want to think about that! Hopefully I still be alive, hopefully we’ll all be still alive.

Yeah, yeah find the sanctuary. My mum lives down the south coast of Sydney and that’s super chilled that’ll probably be my sanctuary, I’ll definitely be cooking up a storm in my later years.

(Laughs) epic, I’ll come join. And what are all your parents like? What are their thoughts on this whole rock n roll lifestyle your embarking on? Are they cool about it?

Man they’re psyched for sure. My mum is super psyched and all the other parents love it too. Especially now we’re cruising I’m sure they’re all psyched on their sons.

Yeah for sure, and you just signed with Warner right?

Yeah it’s with Warner but it’s going to be with our own label called Ratbag Records.

Yeah so I guess the three of us are owners of a record company I guess and hopefully with the label we’ll be able to put other bands’ albums out under our umbrella as opposed to anywhere else.

Yeah sick my mate and me are starting a funny punk band called Fat Ratz actually?

Classic, what do you play?

Um, I don’t even know yet its going to be crook, I’ll send you through a demo.

(Laughs) I’m psyched that’s already amazing; just keep it so you don’t even know what you’re playing either.

So tell us about these tours coming up…

Yeah we’ve got South Africa and then there’s a couple of festivals in the UK I think. Then in Europe there’s some quick stuff like everyday for a few weeks we’re playing. Everyday there’s a new gig in a new country like Amsterdam, France and Germany and then I think we’re going to coma back through Asia, do a few shows in Malaysia and then end up in Bali and chill out there before the Australian leg.

Wow, so are the Dunies officially going around the world just creating mayhem for the next few months?

Ha-ha fuck yeah that’s the plan man. I’m super psyched for South Africa. I went there for the first time last year and its similar to Aus. – there’s heaps of stuff going on, it’s really cool.

Who are the biggest lords you’ve met through this whole experience? Is there a crew you always like to catch up with?

Umm… Well the dudes from Fidlar are fucking lords man! We caught up with them recently and went over to the place where they live. They live in this warehouse and have made it into a studio and it’s where they recorded their album. They’re just still holding it down as a band that is still super D.I.Y but are a bigger band. That’s really sick to see. There’s so many people that have helped our band it through their lordish shit that they have going on, its sick.

Who’s the biggest desmond* you’ve met? Can you say that?

Oh that’s a good question, I don’t want to rat anyone out but its sick copping desmonds because we don’t mind to laugh about their desmond activity. Yeah I can’t even think of the biggest desmond but there’s a couple of good ones, they’re around.

Yeah you know when you meet one huh? So you’ve been to Hawaii, America and places like that. Is surfing something you make apart of your tours or you just naturally gravitate towards towns and venues on the coast?

I’d be so psyched if we could make surfing more apart of it. It works better on the coast anyway. If we’re there then I’ll definitely try and go surfing. Sometimes there’s just no time. You’re constantly on the move, which sucks when you meet people short term and you have to bail but you just have to keep making tracks.

Do you ever get over constantly moving?

In America when we travel in an RV its so good man, it’s good to go a new place everyday otherwise your kind of just sitting in a parked car. I’m curious to see how we’re going to get around Europe. I guess by train, I don’t know. I’ll be wondering on the next trip if we’ll be over carrying gear. Just trying to downsize shit, especially with luggage, you don’t need to take anything travelling really. You acquire and lose stuff, it just works out.

Yeah just take a shirt and your guitars and your sweet…

Yeah fully, I’m trying to embrace that I just probably be a talk up and show up to the airport and be ‘Mr. Luggage’ again.

(Laughs) yeah, I’ll see you a photo of you with like three backpacks and an Asian chauffer and shit…

Finally, if the Dunies had a philosophy or motto to live by, what would it be?

Um…. I don’t know, I’ll have to come back to you with a good one but. (Changes voice impersonated the characters of the YOLO YouTube clip) Everyone doesn’t mind getting f%#ked up!

Nothing like cooking it up with fellas and getting’ f*#ked arrpp!

The phone conversation ends in laughter and hysterics as we keep yelling, “let’s get farrked up!”

* A desmond is someone who sucks. I.e You’re such a desmond Gina Reinhart.

Check out all tour dates and get tickets at- http://www.dunerats.tv/