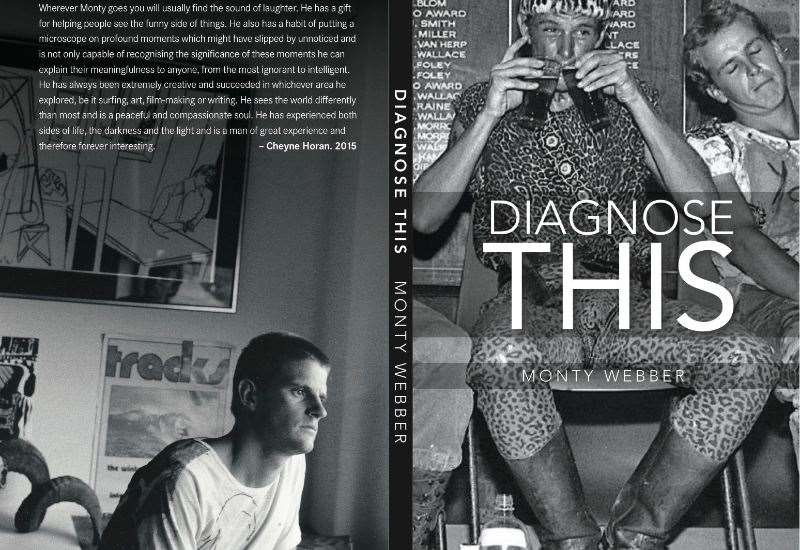 ‘Diagnose This’ By Monty Webber

“Fiction is based on reality. Unless you’re a fairytale artist, you have to get your knowledge of life from somewhere; you have to

know the material you’re writing about before you alter it,” so said Hunter S Thompson, the writer best known for his novel, Fear and Loathing in Las Vegas. Monty Webber’s latest anthology of short stories, Diagnose This, mostly travels this path, with a detour or two to observe the hypocrisies inherent in our increasingly materialistic world.

In the foreword, journalist/author Adam Courtenay (the son of Bryce) observes that Webber’s stories “show a man immersed in all cultures and stuck in none”, whose “writing is just too honest”.

“Monty’s universe makes no sense. Things happen arbitrarily. People implode, situations get out of hand. Characters enter and exit. There’s no happy ending, no perfect denouement. If Monty doesn’t always come out of it smelling like roses, then so be it.”

No quarter is given; expect to read tales that often step well past the ever-moving political correctness line that permeates Western democracies – and, if you’re easily offended by profane language, this book is not for you.

Another Hunter S Thompson quote defines Webber’s tone: “Life has become immeasurably better since I have been forced to stop taking it seriously.”

Meanwhile Webber’s writing ethic is encapsulated in Carroll John Daly’s book, The Snarl of the Beast, first published in 1927, when the detective character, Race Williams, narrates: “I’m just a halfway house between the law and crime: sort of working both ends against the middle.

“Right and wrong are not written in statutes for me, nor do I find my code of morals in the essays of long-winded professors. My ethics are my own. I’m not saying they’re good and I’m not admitting they’re bad, and what’s more I’m not interested in the opinions of others on that subject.”

On his writing style, Webber, ever the storyteller, says: “One of my favourite stories about John Steinbeck was when he was in Spain in a cafe and he came across a copy of [his 1937 novel] Mice and Men – a very well-thumbed, translated version.

“It had been read and loved, apparently, by everyone in the village. They all came out and met Steinbeck and the guy he was with, an author who was very critical of Steinebeck’s ‘too simple’ writing. “But Steinbeck said he would rather connect with the simple man than the intelligentsia.” Webber once enrolled to study a psychology degree but then realised he “could learn more about society and psychology online”.

“They were just going to cover the science for the first couple of years; but I was far more interested in things like consciousness, which is immeasurable. I got more into working from home and researching as much as I could in any area I found interesting; incorporating that into my life and my writing.”

Adam Courtenay throws some light on the outcome of Webber’s research and observations: “This book will tell you stories about surfers, women, old men, drug addicts, alcoholics, crazies, wife-beaters and kidnappers. But they’re not what it’s really about. It’s what happens around this cast of characters. A great writer makes you realise more about yourself than any of these players.”

When I make comparisons between Webber’s book and sitcoms, regarding the way he exploits human failings to generate his humour, he says: “We’ve got to be careful of over pathologising; it’s unhelpful in some ways to try and put labels on things; there’s a co-morbidity of a variety of disorders going into every person – I think I suffer from an amount of mild disorders and have had an extraordinary amount of different experiences.

“I’ve met a lot of different people, so I’m very comfortable in writing about, not only the people and the experiences, but imbuing it with my own psyche. We live in a time of great sickness – spiritual, emotional and mental illness throughout the world. I try to bring that into focus with my stories.”

Webber challenges the people who may recognise themselves or aspects of themselves to “look at their own behaviour – while that may seem like a contradiction [considering his own behaviour] – what I mean is, if this book triggers anything … they should be looking into their own souls, seeing what it is and questioning themselves about that.

“The way that people are behaving and how mean spirited they are needs to be drawn attention to. I think that there’s this hypocrisy that’s in Australia that has come about because, generally speaking, we are spoilt.”

Or has Hunter S Thompson put it in Fear and Loathing in Las Vegas: “In a closed society where everybody’s guilty, the only crime is getting caught. In a world of thieves, the only final sin is stupidity.”

The look on Monty Webber’s face may well be a mirror to the people who read his new anthology of short stories, Diagnose This. The Yamba book launch will be at The Uptown Bar and Cafe at 10 Clarence Street at 6:30pm this Friday the 4/3/16.

To buy yourself a copy email Monty at monty61@live.com.au or Facebook message him your snail mail address, he will exchange bank details and for $25AUD mail you a signed copy.

Stay tuned for more details of the Sydney book launch.