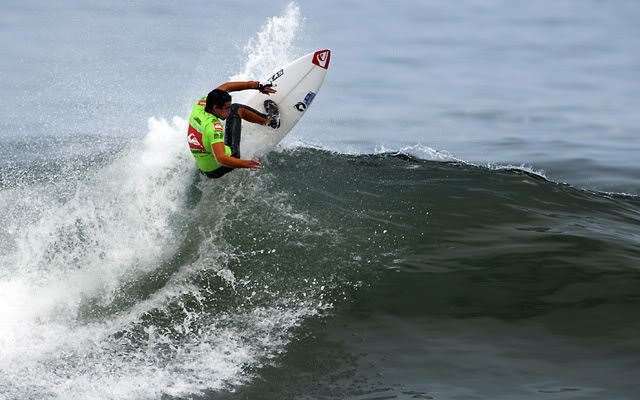 Team USA starts strong as the only nation with all of their surfers in the main event.

Morocco was well represented today by the one-man team of Ramzi Boukaim who made it to the Main Event Round 3. Photo: ISA/RommelGonzalez

The waves of Señoritas and Caballeros were near perfect on the second day, with consistent, long and glassy 3 to 5-foot faces breaking under sunny skies. The remaining competitors, who didn’t compete yesterday from the record-breaking total of 276, had their first round heats today.

After the main event’s 48 heats were held, only Team USA stands without any faults with all of their 12 National Team members surfing the main event.

In the podium at Señoritas, the Under 18 Boys division advanced through their first and second rounds, already determining the 32 surfers to continue to the third round. Some of them entered the water twice today, like Hawaiian Keanu Asing, 2009 Under 16 Boys ISA World Champion, who won the two heats he entered with a combined 13.00 in his debut and 10.76 in his second round match-up.

Portugal’s Vasco Ribeiro, the current ASP Europe Pro Junior’s ranking leader, was ripping again and surfed strong enough to post the highest combined total of the second round of 13.93 (7.10 + 6.83).

“I’m feeling pretty good,” said Ribeiro. “It was an absolutely tough heat. I tried to do my best and get first place. I was nervous because I had a new board, but after my first wave I was feeling better. Everything worked great, the waves and the contest are really good.”

Moroccan Ramzi Boukaim gave the surprise of the day after winning his heat against local star Martín Jerí by posting a combined score of 14.50 (8.50 + 6.00). Francisco Alves from Portugal placed second.

Boukaim, an experienced junior and the only Moroccan in the event, said after his heat, “Martín Jerí is a good surfer but I managed to catch a good wave and make it through. Unfortunately my team couldn’t come. It’s my coach and I, but it’s not the first time this has happened. (Ramzi travelled alone to the 2009 ISA Juniors in Ecuador). I’m having a great time; being here on my own doesn’t bother me. I’m having fun and everything’s great.”

Other standouts in the division were Carlos Mario Zapata (PER), Luke Davis (USA), Matheus Navarro (BRA) and Cooper Chapman (AUS). All of them had great performances and won their heats posting combined scores of over 11.00 points.

The girls hit the water at Caballeros and showed a great surfing level, posting both the highest combined and single wave scores of the event so far. Johanne Defay (FRA) posted 16.73 (8.50 + 8.23) out of possible 20, while Sara Baum (RSA) made great use of her backhand attack to score a 9.33 on her best wave.

“It’s really weird out there as there are a lot of waves all over the place,” said 2010 Bronze Medalist, Lakey Peterson. “I tried to get a first good wave fast to feel comfortable the rest of the heat. Luckily I did it and now I will maintain my focus and try to win the gold!”