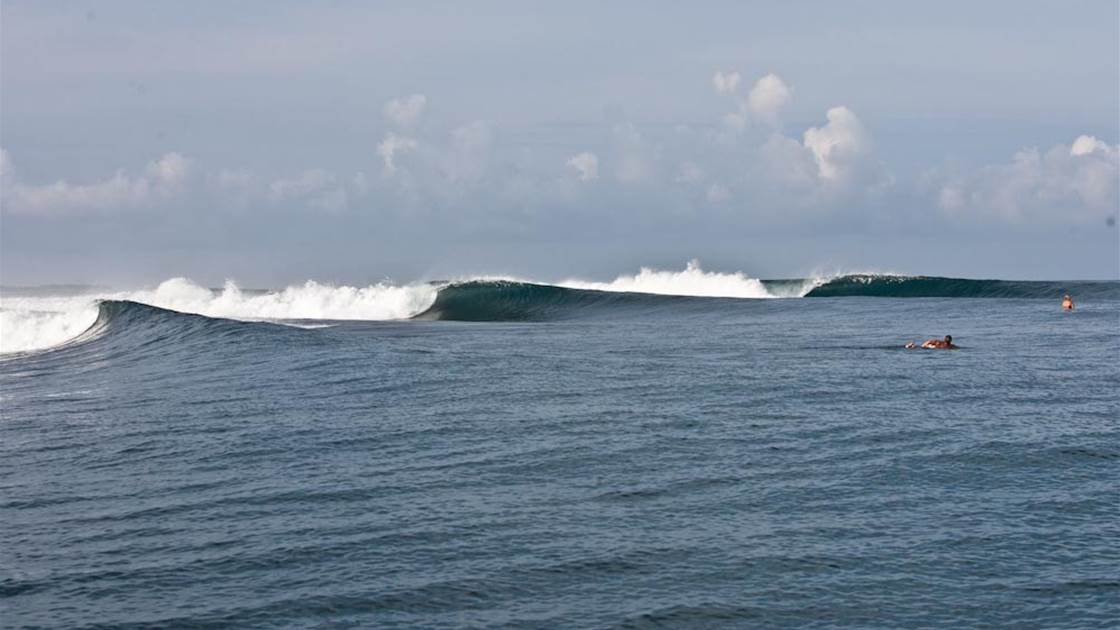 CROWD-FREE ADVENTURE IN THE MENTAWAI ISLANDS

I felt a touch of sadness packing up to leave the resort at Macaronies. It was going to be hard to say goodbye. The food, the staff and the sleeping quarters had all been first class. Unfortunately, we hadn’t really scored the ideal conditions for the famous wave. There was too much south in the first swell. The second swell had more west and ran down the reef with mechanical precision, but the big sets were inconsistent. A charter boat full of frothing surfers arrived for the best day, so the lineup was busy. You had to be lucky to get a really good one. Such is the nature of surf trips. Sometimes you just have to roll the dice and try again.

Myself and a friend had organized to catch up with an acquaintance sailing south. Word had reached us that there were still a few surfers up around playgrounds, and the winds hadn’t been favorable through the central areas of the Mentawai Island chain. The breaks at the southern end were supposedly empty. Time would tell.

After saying our farewells at the resort, we were dropped at the sailboat. The voyage south was quite bumpy. I watched rain squalls circle the nearby horizon while a lingering seasick-nausea built steadily in my stomach. The ocean was just starting to find calm when we arrived at Thunders. As dusk approached, the wind dropped and we paddled out. Heavy ragged walls of ocean rolled through, reminding all of us that the dying swell wasn’t quite dead yet.

Another storm appeared over a nearby island just as we were finishing dinner. The boat was beginning to rock as we made our way to bed. I settled into my cramped cabin and tried to ignore an ominous rumbling of thunder. It was a restless night. Lightning cracked overhead as the boat pitched in rough seas.

We anchored up at Thunders for three days. The weather continued to be unpredictable, but there were still classic Mentawai moments. Amongst the storm activity and drizzle, the wind would occasionally swing offshore and the sun would come out. Long lefts shifted up and down the reef, offering the occasional barrel and long bending walls.

We eventually pulled anchor and continued the journey south. A small bump in the swell was scheduled. Various surf buddies had been raving about a spot called The Portal, making me feel like I had been missing out. On the way, we stopped off overnight behind a small island. A pale sandy beach ran up to a low headland where the forest met the sea. The coconut palms swaying in the breeze looked like they could have appeared on a tropical postcard. A large Manta ray swam in great arcs nearby as the setting sun bathed the horizon in tangerine flame.

It was blue skies the following morning as we motored to The Portal. I was already lathering on the zinc as we dropped anchor. It was only just overhead but the potential of the wave was obvious. Even at that size the sets had a real thickness to them. We managed to find a few barrels before our luck turned and we snapped two boards in quick succession.

The weather gods continued to curse us over the next few days. After being strangely absent for most of the season, the trade winds began to howl. Several storms blew through, soaking the boat in heavy rain. Getting a proper night’s sleep had already been proving a challenge, now it became impossible. We spent long mornings checking blown-out surf spots in a daze of exhaustion and lingering seasickness. There were a few moments of excitement one afternoon when we happened across a giant ball of baitfish. Seabirds hung squawking overhead while giant trevally came surging out of the murky depths. One of our fishing rods soon bent double and the reel began to scream. That night we feasted on crumbed fillets while hoping our luck was about change.

We scored Thunders again on the return journey north, then continued onwards to Macaronies. The lineup felt relatively crowded with eight people out. It was the first time we had surfed with anyone else in days. We remained anchored in the channel, as the swell filled in. The trade winds continued but were much lighter, fanning what has to be the most user-friendly barrel in the whole island chain.

A difficult decision presented itself as the swell began to drop. Stick it out at ever-consistent Maccas, or roll the dice, and head to Lance’s Right. The winds were predicted to swing west, but we were still unsure. The forecast had already sent us on more than one wild goose chase. Having never before surfed the legendary right hander, I spoke up and made the call. We cruised past Katiet later that evening and anchored deep inside the bay.

Our captain was in the wheelhouse at dawn. You could see smooth lines of swell reeling down the reef as we approached. I was the first one in the water and scored almost an hour of very uncrowded perfection. The sets were consistently overhead, with the occasional bigger one that doubled up and reminded me of footage I had seen in countless surf vids.

I picked off a couple of smaller options to settle the butterflies in my stomach, then lucked into something with a bit more size. Tense anticipation began to take hold as I watched a flawless wall of ocean stand up down the line. Flying down the face, I had one of those classic heart in your mouth moments. When the wave towers above and throws, right as your fins and inside rail are struggling against the laws of physics. Even from the inside, the barrel looked perfect. A continuously falling curtain of shimmering blue that spun just beyond reach. After what seemed like forever, the channel appeared and the spinning vortex ahead began to lose shape. This would have been the time to pump higher and tuck in tighter. Instead, I stood there like a stunned mullet as the foam ball lifted the tail of my board and pitched me forward.

I remember sliding backward down the face, while a voice in the back of my mind screamed something about a sharp reef. In the same situation, I would normally be wrapping my arms around my head in a blind panic. But I was high on adrenaline and mesmerized by what was possibly the longest barrel of my life. When the surging rinse cycle dragged me to the bottom, the scraping felt more like a massage from a beautiful mermaid with smooth bare breasts and flowing blonde hair.

The expats and long-term residents paddled out and politely took over the line up. I decided to pick off the smaller ones and soon ended up on the surgeon’s table. Having previously heard rumors about this particularly nasty piece of reef, I attempted to swiftly exit the area. Unfortunately, my leg rope snagged on a coral head and I was temporarily drydocked. When I eventually made it back to the channel, I headed straight for the boat, and the sting of freshly squeezed lime on open flesh wounds.

The wind blew offshore all through the day. Exhaustion forced us back to the boat but we remained anchored in the channel. One flawless barrel after another rolled through. I sat on the prow, watching it all unfold while realising that this was exactly the type of wave you could dedicate your life to. It was obvious that a few in the water had done just that. There was some textbook tube riding on display, with regular late exits from well beyond foam ball territory.

The wind swung overnight and we ended up heading around to Lances left the following morning. The bumpy walls were deserted but we could only manage a short session. We lucked into some mobile reception while anchored and were able to update our various forecasting apps. A light conversation became a debate as plans were discussed. Eventually, we decided to continue north to Playgrounds.

We arrived there a day later, just in time to catch a fresh south swell. Rifles never really did its thing, but 4 Bob’s and the surrounding breaks were consistently fun for days on end. There was a small crowd of surfers staying at nearby resorts but the lineups were all fairly relaxed. Everyone just seemed too surfed out to worry much about anything.

We were eventually dropped at Masokut island, just north of The Playgrounds. The camps there were all fairly quiet. With a few late season swells on the way, scoring uncrowded Pitstops, Ebay and Beng Bengs would be a great way to finish the Mentawai adventure.