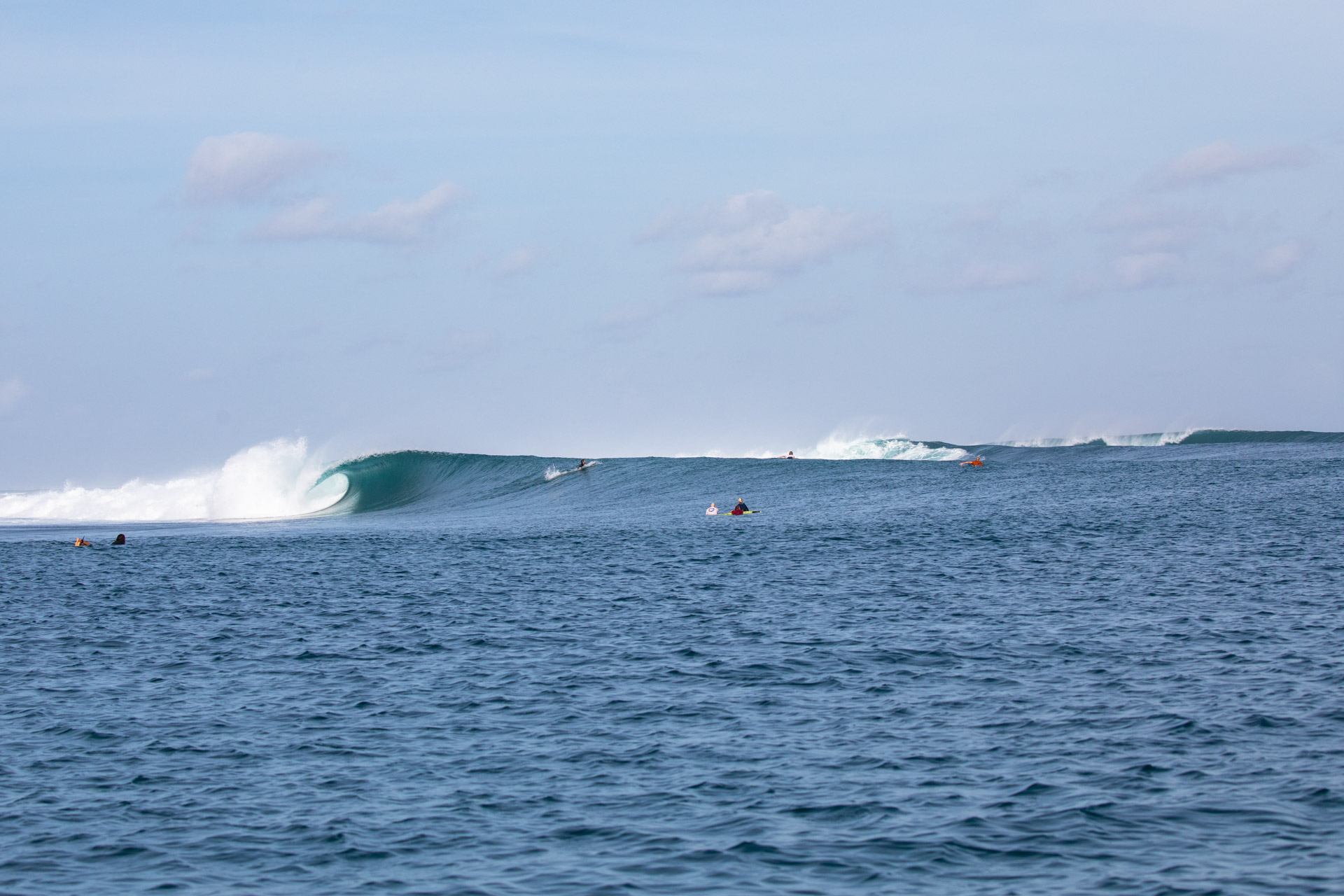 A Chopper Ride to G-Land

Sometimes a friend makes a proposition you simply can’t refuse.

Pat Cahill and Bill Morris were surfing in three-inch rubber and shivering through a Sydney cold snap when the call came through. Real Estate agent and good friend, Jason Boon, had been the beneficiary of a booming market and was eager to embrace the recently relaxed travel restrictions. Boony, as he’s known, makes bank but he’s a surfer at heart and is known for his generosity. He told his two friends he was happy to cover the room at Bobby’s G-Land camp.

Pat is a keen goofy footer who runs a boutique, eastern suburbs surf shop called Sunburnt Mess that specialises in retro-themed surf craft. He spends plenty of time with customers who like to fondle rails and talk about their surfing exploits, but sometimes he also needs to get a surfing fix. Bill is a retired 62-year-old retired fireman, and surf photographer who still lives to surf and shoot photos.

However, when Boony said he’d spot the trip they both still baulked. Pat was worried about time away from his young son while Bill was concerned he didn’t have the right boards. Then Boony dropped the clincher. “I’ll charter a chopper from Bali to fly us to G-Land.” He also said he’d lend Bill a 6’10” and 7’2” that were originally shaped for Owen Wright, but that Boony had acquired. The promise of a grand entry and boards got them over the line. How could they say no?

After flying to Bali and spending a day in Seminyak the trio joined another friend, Dave Horn, and were soon boarding a whirly-bird to G-Land. As the chopper has strict weight and size limits, the crew at Bobby’s surf camp had arranged for the freight of their boards to the camp the night before. Embracing the spontaneous spirit of their caper the four friends bought masks at a market en route to the helipad. Why not have a little fun?

Soon they were belted-up in beneath spinning blades, and brimming with excitement. “Everyone was pumped!” recalls Pat. “The helicopter was pretty new and the company was legit. There was safety briefings and all that kinda stuff which definitely calms the nerves… They are just inland from the tip of the Bukit so you take off and can see the massive statue and head out over Green Balls and out past Ulus, then over the Strait.”

According to Bill, the highlight was coming in low over the reef at G-Land. “He (the pilot) dropped down to 20 feet off the reef next to the jungle. It was like being in Apocalypse Now.” Even after two laps of the reef to take photos, the whole flight had taken them a mere twenty-one minutes from Bali. For Boony it felt worth every cent of the $3500 return fee he’d negotiated.

The waves weren’t far away when they showed up. After a warm-up day at three-foot Money Trees they were soon enjoying a six-eight-foot swell that sent lines coiling all the way down the reef. While Pat put his 6’5” Christenson Lane Splitter to work at Money Trees, Boony and Bill drifted down to Speedies where Boony scored a couple of bombs amongst a competitive pack.

Asked if the fly-in fly-out tactics caused any friction with other guests, Pat was adamant that they were well received.  “Ha, I thought that might happen but na, everyone was cool.”

Pat was however at pains to point out that the isolated, jungle-fringed setting at G-Land is still a great leveller. “You’ve gotta be cool in and out of the water. If you hassle or burn someone, then it’s going to be pretty awkward at dinner. Being out there in the jungle takes away all the ego.”

While Pat and Jason caught the chopper back and have since returned home, Bill is still at G-Land with his quiver of Owen Wright guns. “I was out there yesterday going mac ten on a 6’10,” he enthused.  “It’s been pumping since I’ve been here,” insisted Bill, who was calling in from the jungle and intent on staying at least another week.